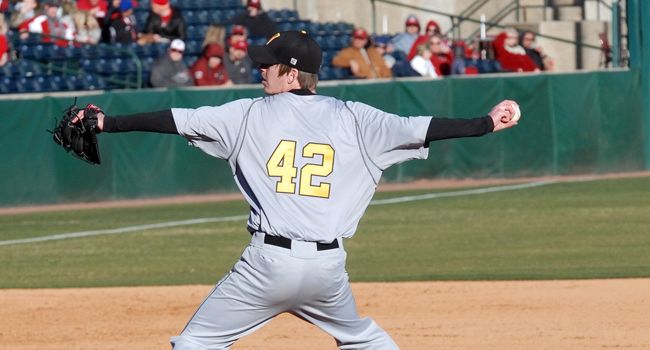 Will Robinson picked up his third victory of the season on Wednesday. (Rick Cochran)
Valparaiso at Notre Dame | May 02, 2012
Related Links
Related Links

Valparaiso scored four times in the fourth inning and added three more runs in the seventh on the way to a 7-4 victory over Notre Dame on Wednesday evening at Frank Eck Stadium in Notre Dame, Ind. to run the Crusaders’ winning streak to eight straight games.

The Brown and Gold defeated the Fighting Irish for the first time since 2001, when Notre Dame was ranked #1 in the nation.

“Our defense was good tonight and we executed on offense, especially in our two big innings,” head coach Tracy Woodson said after the game.

The Crusaders had chances in each of the first three innings, drawing three walks and having two batters hit by pitches, but were unable to push a run across the plate.

Notre Dame (23-21) found the scoreboard first in the bottom of the third inning as Eric Jagielo singled home Mac Hudgins with the bases loaded.  A double play got Valpo out of the inning though with just the one run scoring.

Valpo answered with four two-out runs in the top of the fourth.  Spencer Mahoney (LaGrange Park, Ill./Lyons Township H.S.) reached on a hustle double and took third on a wild pitch as Steven Scoby (Delton, Mich./Delton Kellogg H.S.) drew a walk.  Andrew Bain (Indianapolis, Ind./Park Tudor H.S.) tied the game at one with a single up the middle.  Bain and Scoby then took off on a double steal, and when the throw got away, Scoby crossed the p late.  Tanner Vavra (Menomonie, Wis./Menomonie H.S.) followed with a RBI single, as did Chris Manning (Lake Forest, Calif./El Toro H.S.), and the Crusaders had a 4-1 lead.

“We had some chances early and didn’t take advantage of the free passes,” Woodson said.  “It was nice to get another chance and we were able to capitalize, and then kept the inning going.”

Jagielo drove home the Irish’s second run in the fifth on a sacrifice fly to cut Valpo’s deficit to two.

The Crusaders added to their lead in the seventh as Manning drew a one-out walk and moved to third when Will Hagel (Arlington Heights, Ill./Prospect HS.) singled to center and went to second on an error.  Elliott Martin (Irvine, Calif./University H.S.) singled to left, scoring two runs, making it 6-2 Valpo.  Mahoney added a RBI hit two batters later to score Martin, giving Valpo a five run lead.

Despite putting the leadoff man on in seven of the nine innings, Notre Dame could not cut into Valpo’s lead until the ninth, scoring a pair of runs.  A run-scoring single by Kevin DeFilippis and a ground out by Ryan Bull plated the final two runs before the Crusaders secured their 15th victory in their last 17 games.

Will Robinson (Placentia, Calif./Valencia H.S.) worked the first five innings to earn the victory, allowing just two runs on six hits.  He walked three and struck out one.

“Will Rob being able to throw five innings is a big confidence boost for him,” Woodson added.

Kyle Rubbinaccio, the first of seven Notre Dame hurlers, suffered the loss (0-1).  He gave up four runs and five hits while walking four in just 3.2 innings on the hill.

Bain, Vavra, and Mahoney each had two hits to pace Valpo’s 10-hit attack while DeFilippis went 3-for-4 for the Irish.

“We’re definitely getting hot at the right time,” Woodson added.  “I hope we can go into Wright State and play well.  If you play well results usually take care of themselves.”

Valparaiso (23-20), now 5-0 on this current eight-game road trip, will head to Dayton, Ohio this weekend for a three-game series against Wright State with first place in the Horizon League on the line.  The Crusaders trail the Raiders by just one game in the standings.  First pitch on Friday night is set for 5:30 p.m. from Nischwitz Stadium.