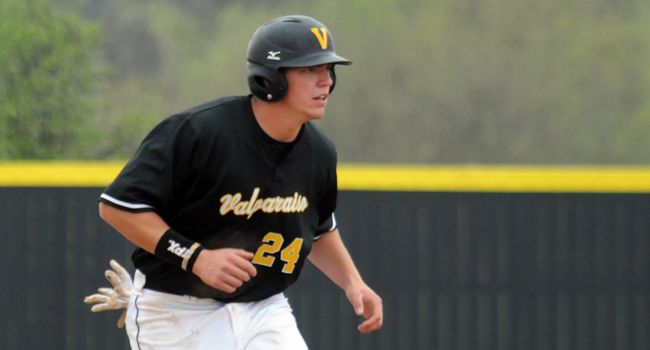 Will Hagel drove in two runs, including the game-winner, on Wednesday. (Ray Acevedo)
Ball State at Valparaiso | May 09, 2012
Related Links
Related Links

Will Robinson (Placentia, Calif./Valencia H.S.) carried a no-hitter into the seventh inning on Wednesday afternoon and Will Hagel (Arlington Heights, Ill./Prospect H.S.) drove home the winning run with a single in the 10th inning as Valparaiso defeated Ball State 3-2 at Emory G. Bauer Field.

“It’s nice to get the win,” head coach Tracy Woodson said after the 147th victory of his career, moving him into a tie with Rick Ferchen for third most wins ever at Valpo by a head coach.  “Our guys are busy getting ready for finals and we’ve played a lot of games over the last few days.  It’s nice to get a win in a game like this where we weren’t necessarily playing our best baseball.”

Robinson cruised through the first six innings, with the only base runner being a leadoff walk to Wes Winkle in the fourth.  Winkle eventually scored on a sacrifice fly by Brandon Estep.  He also gave up a RBI single by Billy Wellman in the seventh which tied the game at two.

The fifth-year senior ended with a no decision after working seven innings, allowing just two runs and two hits.  He walked one and struck out four.

“Will throws hard,” Woodson added.  “With that kind of velocity you can get away with a couple of mistakes.  He did a pretty good job out there for us today.”

Valpo took the lead in the third with a pair of runs.  Steven Scoby (Delton, Mich./Delton Kellogg H.S.) led off with a single and moved to second on a sacrifice bunt.  Tanner Vavra (Menomonie, Wis./Menomonie H.S.) bunted for a hit, putting runners at the corners and Chris Manning (Lake Forest, Calif./El Toro H.S.) gave the Crusaders the lead with a squeeze bunt.  Hagel followed with a single into right, giving Valpo the 2-0 lead.

The single runs by the Cardinals in the fourth and seventh were the entire offensive that Ball State managed on the afternoon.  The Crusaders had chances to win in the eighth and ninth, but the fourth double play of the game in the eighth ended that threat.  In the ninth, Valpo put runners on the corners with two outs before a ground out ended the inning.

“Both teams were really good today,” Woodson said.  “Ball State turned four double plays and Elliott Martin made some great plays for us at third.”

Vavra came through with a leadoff single in the 10th and Manning bunted him to second.  Hagel then singled to left for his second RBI of the afternoon, accounting for the game-winner.

“Hagel’s getting hot,” Woodson concluded.  “We need him to keep that going for us down the stretch.”

Hagel, Vavra, and Martin each had two hits as Valpo tallied 10 on the afternoon.  Ball State (11-33) managed just four hits on the day against the Crusader pitching staff.

Jarad Miller (Fort Wayne, Ind./Carroll H.S.) earned the win (5-2) for the Crusaders with a scoreless 10th inning while Scott Baker also came on in the 10th and suffered the loss for the Cardinals.

Valparaiso (27-21) has won 12 of its last 13, and 17 of its last 19 with Wednesday’s victory to move six games over the .500 mark.  The Crusaders will continue this homestand when they open a three-game weekend series with UIC on Friday afternoon with first pitch slated for 3 p.m. at Emory G. Bauer Field.