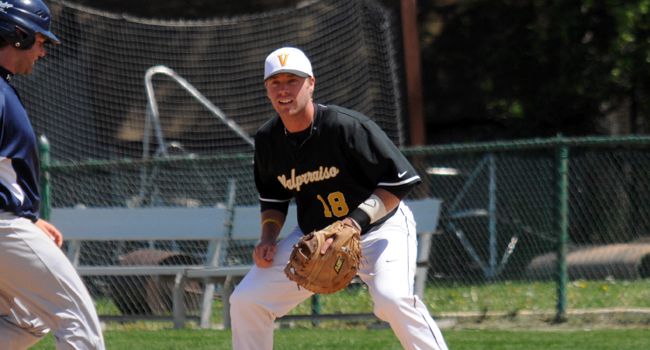 Valparaiso scored eight times in the sixth inning and added three more runs in each of the next two frames on Friday afternoon to defeat UIC 14-2 at Emory G. Bauer Field in the opening game of a three-game weekend series.

With the victory, the Crusaders move seven games over the .500 mark at 28-21 for the first time since 2001.  Valpo also remains tied with Wright State atop the Horizon League standings at 18-7 in conference play.

The offense took a bit of time to get going, as UIC scored the game’s first two runs.  Ryan Boss hit a two-out solo home run to open the scoring in the top of the fourth and Alex De La Rosa singled home John Coen in the fifth to put the Flames on top 2-0.

UIC starter Joey Begel faced the minimum through the first five innings, allowing a single and two walks, but getting two double play plays and a caught stealing to keep the Crusaders off of the scoreboard.

“Begel had his good stuff, especially early,” head coach Tracy Woodson said.  “But we did a good job of working the counts and pitching his pitch count to rise, and we were finally able to get to him in the sixth.”

“Scoby’s triple and Bain’s at bat with the infield were both huge for us,” Woodson added.  “They gave us a lot of confidence.  Scoby’s been swinging the bat well for us lately.”

Tanner Vavra (Menomonie, Wis./Menomonie H.S.) followed with a perfect bunt single and Chris Manning (Lake Forest, Calif./El Toro H.S.) followed with the fourth straight hit, a single, to load the bases.  Will Hagel (Arlington Heights, Ill./Prospect H.S.) put Valpo on top with a single through the right side, scoring two, and John Loeffler (Burnsville, Minn./Burnsville H.S.) ended Begel’s day with a double to the gap in right-center, increasing the lead to three.  Elliott Martin (Irvine, Calif./University H.S.) added the sixth run with a single and Cribbs completed the eight-run uprising with a two-run single to left-center.

“Once our bats came alive we had some great at bats,” Woodson added.

The Crusaders added three more runs in the seventh on a ground-rule double by Hagel and a two-run double by Martin.  Manning was hit with the bases loaded in the eighth to force in a run while Loeffler doubled home two more to cap the Crusader scoring.

“We didn’t get away at bats today, even late in the game,” Woodson commented. “That’s something I’ve been telling the guys over and over.”

The 14 runs were more than enough for Valpo starter Tyler Deetjen (Saint Charles, Ill./East H.S.), who worked eight innings for the victory (5-2).  He gave up just the two runs on nine hits and struck out two, while walking just one.

“Deetjen did a nice job in tough conditions today,” Woodson said.  “It was warm out and the wind was blowing out.”

Valpo pounded out 16 hits on the afternoon against four Flames pitchers, with Hagel, Loeffler, and Martin all driving home three runs each.

Valparaiso and UIC will play game two of the three-game weekend series on Saturday afternoon.  First pitch is slated for 1 p.m. at Emory G. Bauer Field.