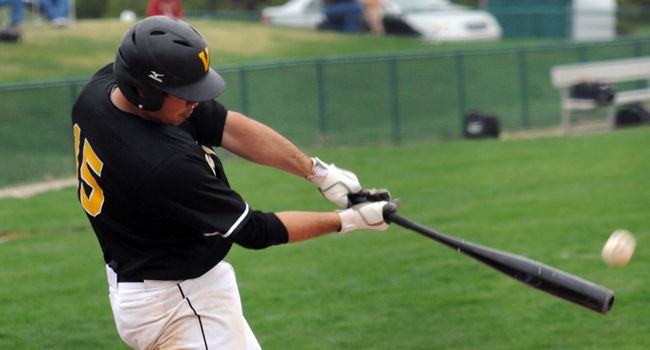 Elliott Martin had three hits for the Crusaders in the loss. (Ray Acevedo)
UIC at Valparaiso | May 12, 2012
Related Links
Related Links

Brian Evak tossed a complete-game for the victory (4-5) scattering nine hits and striking out two Crusaders while walking three.

“This just wasn’t a great day for us,” head coach Tracy Woodson said after the contest.  “You have that sometimes in baseball.  We couldn’t get things going and Evak pitched well enough to win.”

The Flames opened the scoring in the third as Jacob McNamara came across the plate on a wild pitch after tripling to right-center with two outs. A three-run fourth broke the game open as Alex Grunenwald doubled home the first run of the inning and Alex Lee added a RBI single.  A McNamara sacrifice fly made it 4-0 UIC.

Valpo got one run back in the bottom of the fourth when Chris Manning (Lake Forest, Calif./El Toro H.S.) led off with a single and moved to third on a double by John Loeffler (Burnsville, Minn./Burnsville H.S.).  Elliott Martin blooped in a single just over shortstop to plate Manning with the Crusaders’ first run.

UIC answered with a run in the fifth on a single by Grunewald to retake a four-run lead.

Martin’s second RBI single of the game in the sixth scored Will Hagel (Arlington Heights, Ill./Prospect H.S.), making it a 5-2 game.

Grunenwald’s third run-scoring hit in the game gave UIC a four-run advantage again in the seventh and the Flames added two more in the eighth before Valpo tried to make a ninth inning rally.

Spencer Mahoney (LaGrange Park, Ill./Lyons Township H.S.) led off with a walk and Billy Cribbs (Rochester, Mich./Rochester H.S.) followed with a single.  Andrew Bain (Indianapolis, Ind./Park Tudor H.S.) singled to score Mahoney, but that would be all the Crusaders could score in the inning, leaving runners on second and third to end the game.

Martin led Valpo’s nine-hit effort with a 3-for-4 day, driving home a pair of runs.  He was Valpo’s lone player with a multi-hit afternoon.  Grunenwald and Alex De LaRosa each had three hits as part of UIC’s 13-hit contest.

Kevin Wild (Brown Deer, Wis./Brown Deer H.S.) started and suffered the loss (5-3) for the Crusaders  He allowed five runs and nine hits in 4.1 innings of work.

Valparaiso (28-22, 18-8 Horizon) falls one game behind Wright State in the league standings with the loss.  The Crusaders and UIC (17-30, 10-15) will wrap up the three-game weekend series on Sunday with the first pitch slated for 1 p.m. at Emory G. Bauer Field.