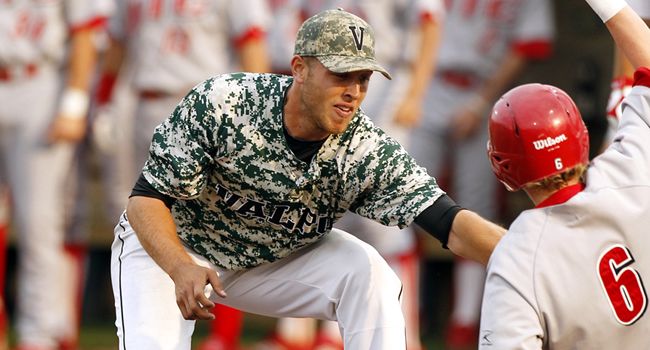 UIC scored three times in the first and added the winning run in the eighth inning as the Flames defeated Valparaiso 4-3 in the Crusaders’ first try at capturing the Horizon League title.  With both teams having one loss in the double-elimination tournament, the two schools will meet back at Les Miller Field in Chicago, Ill. again Sunday afternoon at noon for the title and the league’s automatic bid to the NCAA Tournament.

“Those three runs in the first were a killer,” head coach Tracy Woodson said after the game.  “We fought our way back into the game but it was not enough.”

After a Jacob McNamara walk to lead off the game, Joe Betcher hit a two-run home run to left with one out in the first to put the Flames on the scoreboard.  Alex Grunenwald followed with a double, and scored on a two-out error, giving UIC the early 3-0 lead.

Valpo answered with a run in the bottom of the frame as John Loeffler (Burnsville, Minn./Burnsville H.S.) doubled down the rightfield line to score Chris Manning (Lake Forest, Calif./El Toro H.S.).

The Crusaders continued to chip away against UIC starter Mike Schoolcraft in the fifth.  With two outs, Tanner Vavra (Menomonie, Wis./Menomonie H.S.) doubled and scored on a hit by Manning, pulling Valpo within one.

An unearned run in the seventh allowed Valpo to tie the game.  Andrew Bain (Indianapolis, Ind./Park Tudor H.S.) led off with a single and moved to second on a sacrifice bunt.  Manning reached on a throwing error, allowing Vavra to move to third, and he scored on a ground out by Loeffler.

UIC answered with the winning run in the top of the eighth as Alex Jurich’s single with two outs plated Jon Ryan.

The Crusaders managed just one base runner against Chris Hoffman over the final two innings as Hoffman earned the win (1-3) out of the bullpen, pitching the final three frames.

Kyle Wormington (Norman, Okla./North H.S.) suffered the loss (6-6), giving up four runs, three of which were earned, on six hits.  He walked three and struck out three.

Vavra led Valpo’s offense with a pair of hits as the Crusaders (34-23) managed just six total on the afternoon.  Betcher and John Coen each had two hits for UIC (23-33), as the Flames finished the game with eight.

“We have to come out tomorrow and play a better overall game,” Woodson added.  “We’re still alive.”