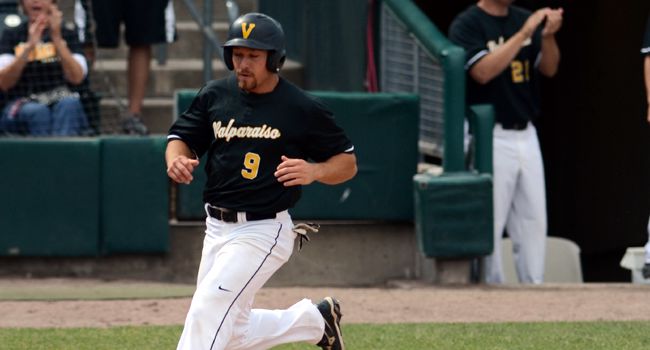 Valparaiso’s first NCAA Tournament trip since 1968 came to an end on Saturday afternoon at U.S. Steel Yard in Gary, Ind., falling 8-1 to #11 Kentucky.

With the loss, the Crusaders end the season with a record of 35-25, tying a school mark for victories in a season.  Valpo was the Horizon League regular season and tournament champions, and ended a 44-year drought by returning to the NCAA Tournament.

“I am so proud of this group of guys,” head coach Tracy Woodson said after the game.  “They have helped to bring Valpo baseball back to where we want it to be.”

The game was a pitcher’s duel for five innings before the Wildcats broke the game open with five runs in the top of the sixth inning.

Kentucky had the game’s first scoring opportunity, putting a runner at third with two outs in the second inning.  Zac Zellers, who drew a one-out walk, moved around the base paths on a stolen base and a wild pitch, but was stranded 90 feet away as Kevin Wild (Brown Deer, Wis./Brown Deer H.S.) induced a flyout from Paul McConkey to end the inning.

The Crusaders had base runners in each of the first two innings, including a base hit by John Loeffler (Burnsville, Minn./Burnsville H.S.) in the second, but double play groundballs ended both innings.  Loeffler’s single extended his hitting streak to 12 straight games and his on base streak to 35 consecutive games.

Valpo put two runners aboard for the first time in the third as Spencer Mahoney (LaGrange Park, Ill./Lyons Township H.S.) was hit by a pitch to lead off the inning and moved to second on a two-out single by Andrew Bain (Indianapolis, Ind./Park Tudor H.S.).  Kentucky hurler Jerad Grundy worked out of the jam with a flyout to end the frame and keep the game scoreless.

Wild again pitched out of trouble in the Kentucky half of the fourth, as back-to-back one-out singles by Michael Williams and Cameron Flynn put the Wildcats in business.  Runners moved to second and third with two outs, but Wild got J.T Riddle to ground out to Loeffler to keep the tournament’s second seed off of the scoreboard.

Kentucky finally broke through in the top of the fifth.  McConkey led off with a single, moved to second on a sacrifice bunt, and scored on Austin Cousino’s one-out single through the right side.

It did not take long for Valpo to tie the game, as three straight two-out singles in the bottom of the fifth evened the game at one.  Steven Scoby (Delton, Mich./Delton Kellogg H.S.) started the rally with a hit through the right side.  Bain followed with a hit through the hole on the left side, putting two men aboard before Tanner Vavra (Menomonie, Wis./Menomonie H.S.) came through with a RBI single into left-center, tying the game at one.

The Wildcats broke the game open in the sixth with five two-out runs.  Zellers started the rally with a two-out single into center and scored as Riddle doubled down the rightfield line on a hit-and-run.  After a walk to McConkey, Matt Reida made it 3-1 Kentucky with a single into right.  Cousino followed with a double off of the wall at the 400-foot mark in straightaway center, plating two, and eventually scored on a double steal of home plate, making it 6-1 Wildcats.

“That one inning put it away,” Woodson added.  “We were awful about giving up two-out runs this weekend.  You can’t allow that.  You have to bear down and get guys out.”

An unearned run in the eighth increased the Kentucky lead to 7-1 as Reida’s infield single scored Riddle from second base.  The Wildcats scored one final run in the eighth as Williams reached on a Crusader error, scoring Thomas McCarthy, who led off the inning with a double.  Valpo had three more errors total on Saturday after committing five in the opener on Friday night against #15 Purdue.

“This was not characteristic of how we played defense this year,” Woodson stated.  “We did not play well defensively in the tournament.”

Valpo had one last threat to score in the bottom of the ninth as Mahoney led off with a double to left-center and moved to third with one out, but a flyout and strikeout ended the season for the Brown and Gold.

Bain finished the game 3-for-4, his team-leading 27th multi-hit game of the season and the eighth time this season he had at least three hits in a contest.  Valpo managed just seven hits on the afternoon.

Cousino went 3-for-5 with three runs batted in to pace Kentucky (44-17) while Reida had two hits and two RBIs.  The Wildcats finished the night with 12 total hits.

Grundy picked up the win (6-3) for the Wildcats, allowing just the one run on five hits in six innings of work.  He walked four and struck out six.  Wild suffered the loss (6-4) for the Crusaders, giving up six runs, five of which were earned, and 10 hits in 5.2 innings on the hill.  He walked two and struck out three.

“We feel like we can play with the big boys,” Woodson concluded.  “Our pitching the last couple of years has been outstanding, and we have added some of the other necessary parts, like securing our middle infield.  We have some guys coming in that will make a difference as well.  We are excited at where we are.  This is not a one-year wonder.  We have a lot of talent coming back.”

Game Notes: This was the first meeting ever between Valpo and Kentucky … the Crusaders had at least one base runner in eight of the nine innings … Valpo dropped back-to-back games for the first time since losing four straight March 30 through April 3 to Wright State and Western Michigan … this was Valpo’s sixth all-time Division I (or University Division) appearance in the NCAA Tournament … the Crusaders are 2-12 all-time in the regionals.