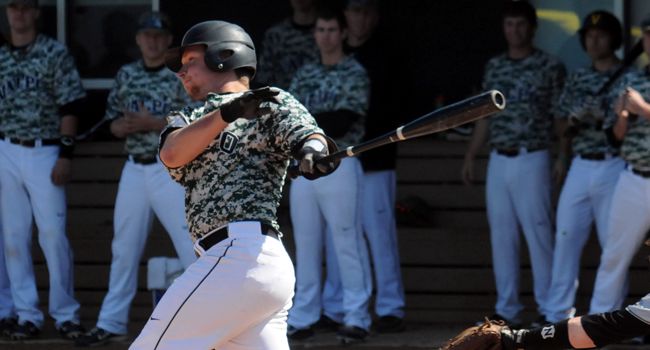 Team Wormington finished the day with twelve hits led by Cribbs and junior Bryce Hara (Irvine, Calif./Northwood) who was 3-for-4, along with freshman Jake Hanson (Aurora, Ill./Aurora Christian) and senior John Loeffler (Burnsville, Minn./Burnsville), who each chipped in two hits, including a double.

It looked as though it was going to be Team Bain’s day, as sophomore Mark Johnson (Evanston, Ill./Evanston Township) led off the game with a triple sparking a two-run first inning.  Junior Chris Manning (Lake Forest, Calif./El Toro) duplicated Johnson’s effort with a triple to lead off the second which gave Team Bain an early 3-0 lead after two innings.  An RBI double by Cribbs in the third inning and an RBI groundout by freshman Aaron Collins (Georgetown, Tex./Georgetown) cut the lead to 3-2.  However, Grant Yoder’s (Fort Wayne, Ind./Snider) two-run homerun in the top of the fifth inning put Team Bain up 5-2 before Team Wormington opened the floodgates with a seven-run answer in the bottom of the fifth, which included a two-run double by Cribbs.

Sophomore Ben Mahar (Mundelein, Ill./Mundelein) suffered the loss for Team Bain but looked strong, giving up only one earned run on four hits through four innings.  Manning and senior Tanner Vavra (Menomonie, Wis./ Menomonie) led the way for Team Bain at the plate with two hits each.

The series will continue between the two teams at Emory G. Bauer Field Tuesday afternoon. First pitch is set for 3:15 p.m.