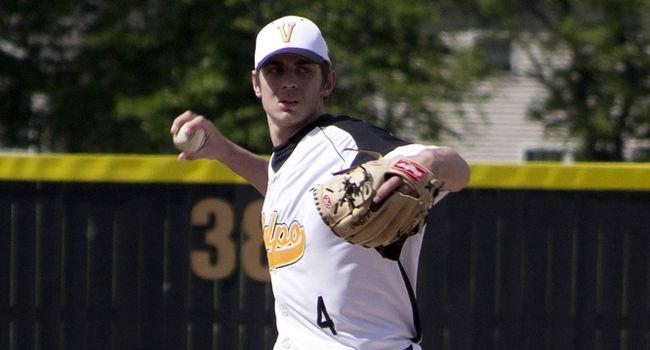 Team Wormington took an early lead in the bottom of the first inning.  After a walk and an error to start the game, junior Karch Kowalczyk (Peru, Ill./La Salle-Peru) singled home a run, followed by an RBI groundout by Andrew Bynum (Huntington Beach, Calif./Ocean View).  However, Team Bain knotted the score at 2-2 in the top of the second against starter Bryce Yoder (Spencerville, Ind./Eastside).  Spencer Mahoney (LaGrange, Park, Ill./Lyons Township) led off the inning with a triple to right-center, scored on a single by Elliott Martin (Irvine, Calif./University) who eventually scored on a bases-loaded walk to sophomore Zack Walsh (Batesville, Ind./Batesville).

After Kennedy pitched a 1-2-3 second inning, Team Bain came to the plate and added two more runs to take a 4-2 lead. Sophomore Michael Morman (Rockford, Ill./Boylan Catholic) doubled off the centerfield wall, Mahoney drove him home with his second triple of the day and Martin added another RBI to his total with a sacrifice fly.

In a losing effort, Team Wormington was led by Billy Cribbs (Rochester, Mich./Rochester) and Kowalczyk, who each had a hit on the day.

The Crusaders have now concluded their fall season and will set their sights on preparing for the 2013 campaign.  The season starts on Friday, Feb. 15, in Nashville, Tenn. when they start a three-game series at Belmont.