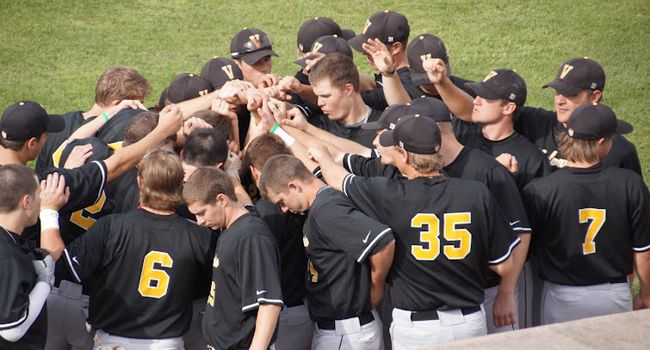 The Crusaders will add nine players to their 2013-14 roster. (Jerry Walsh)

“We are bringing in a group of highly talented individuals. Our staff traveled all over the country identifying the best talent that fits with our program and school,” said Woodson, who enters his seventh season at the helm of the Crusaders.  “Winning both the conference regular season and the tournament championship last year, we knew that we had to go out and find players that could continue to take us to that level and beyond.  I want to thank Coach Schmack and Coach Piotrowicz who worked tirelessly to help put together this exceptional class.”

Matthew Gatewood (Westport, Ind./South Decatur) is a 6-foot-2, 200-pound left-handed pitcher and outfielder.  He is ranked the 4th best left-handed pitcher and No. 26 prospect in Indiana by Prep Baseball Report.  Gatewood is also nationally ranked in the “Top 500” for the 2013 recruiting class by Perfect Game.  He was named Mid Hoosier All-Conference each of the past three seasons and IHSAA All-State Honorable Mention in 2010 and 2011.  A member of the prestigious Indiana Bulls travel team, Gatewood was selected to represent the Midwest by being named to the 2012 Chicago White Sox Area Code Team, which competed in California against the best players in the country.  He hit .417 to go along with a .750 slugging percentage and 23 RBIs as a junior this past spring, while also posting a 1.21 ERA.

Coach Woodson on Gatewood: “Matt is an unbelievable athlete with an electric arm.  He runs a 6.65 60-yard dash and has been clocked as high as 92 mph off the mound.  I believe with Coach Schmack’s guidance, Matt has the potential to be a high-draft pick by his junior year.”

Brady Harris (Westerville, Ohio/Olentangy Orange) is a 6-foot-4, 220-pound first baseman.  He is ranked the No. 89 prospect in Ohio by Prep Baseball Report.  This past season, Harris led his team to the Division I District Championship and the Regional Final.  He earned All-District and All-Conference honors, finishing with a .453 batting average, .518 on-base percentage, 29 RBIs, 31 runs scored, and 9 stolen bases.  Harris' father, Tom, was a two-time captain at Ohio State University.

Coach Woodson on Harris: “Brady is an athlete with a big, strong body and most importantly a quick bat.  He has some versatility in that he can play first or third and we envision that he will be a middle-of-the-lineup type player for us.”

Mario Losi (Anaheim, Calif./Canyon) is a 6-foot-3, 180-pound right-handed pitcher and corner infielder.  He finished his junior season with a 4-2 record with a 2.30 ERA off the mound and a .321 batting average at the plate.  Named “Best Utility Player” at Canyon High School, Losi was also awarded All-Century League for his efforts.  Losi had an opportunity to participate in the Junior Olympics with Blue Wave Baseball this past summer and most recently has been selected to play with the prestigious Seattle Mariners Scout Team.  An outstanding student as well, he has been awarded Scholar Athlete at his high school for the past three years.

Coach Woodson on Losi: “We are very excited about adding Mario to our pitching staff next season.  He is a polished right-handed pitcher out of a very good baseball area in Orange County.  He has three pitches to go along with an upper 80’s fastball, but most importantly, he knows how to pitch and throws strikes.  These attributes, along with his competitiveness on the mound, should allow him to make a big contribution to our team immediately.”

Coach Woodson on Martin: “We feel very lucky to have another member of the Martin family join our program. Just like Elliott, Joppi is a first-class guy who is extremely hard-working with natural instincts and a great skill set.  He is a bigger, stronger version of his brother with a little more power from the right side.  He will make an immediate impact on our team.”

Emerson Misch (Bloomfield Hills, Mich./Andover [IMG Academy]) is a 6-foot-1, 190-pound outfielder.  The 2012 graduate of Andover High School was a four-year letter winner earning All-State, All-Region, All-District, and All-League honors his senior year and ranked in the region’s top 20 players by the Oakland Press.  Misch totaled 107 at-bats with 46 runs, 56 hits (35 singles, 16 doubles, 2 triples, and 3 homeruns), 32 RBIs, 26 walks and 26 stolen bases as the team’s lead-off hitter.  In 2011 as a junior, Misch led his team to a District Championship and Regional Finals, pacing the squad in runs (26), hits (46) and RBIs (23) as well as earning All-League honors.  Also as a member of the South Oakland A’s travel team, Misch was named to the 2012 17u BCS Perfect Game All Tournament team.  Misch graduated with Phi Beta Kappa and National Honors Society honors and awarded Andover’s engineering award.

Coach Woodson on Misch: “We are excited to have Emerson join our team.  It is a unique situation as he graduated from high school last year and will be attending IMG Academy down in Florida this spring to work on his game.  He is an excellent athlete with speed and possesses a tremendous work ethic.  With that combination, we believe that his best baseball is ahead of him.”

JP Paciocco (Austin, Texas/Crockett) is a 6-foot, 175-pound infielder/outfielder.  He finished his junior season with a .500 batting average, 34 steals, and 21 RBIs.  Paciocco was named to the 2012 All-Central Texas Team (shortstop), first team All-District, Crockett High School MVP and offensive player of the year, as well as Oakhill Gazette player of the week.  Also as a member of Action Baseball, an elite travel team in Texas, he was named to the Perfect Game South Qualifier All Tournament team and USA Baseball NTIS team.  In 2011, Paciocco was a Second Team All-District selection, Crockett High School MVP and offensive player of the year and AISD All-Tournament Team.  Also an excellent student, Paciocco received both the Cougar Gold Award (top 10%) as well as the Board of Trustees Award at his high school.

Coach Woodson on Paciocco: “JP is versatile enough to play anywhere on the field.  He has natural athletic ability and speed which you cannot coach.  JP is a sparkplug on the field – runs down balls, steals bases, and has power potential at the plate.  We look for him to be a tremendous asset to our program.”

Mark Pall (Bloomingdale, Ill./Lake Park) is a 6-foot-3, 160-pound right-handed pitcher.  An Academic All-Conference award winner his sophomore and junior year, Pall has been a starter for the Lancers the past two seasons.  He also pitches for the Finish Strong travel team for which he finished the summer with a 1.86 ERA, 1.06 WHIP, 19 hits, 9 walks, 23 strikeouts in 20 innings pitched.

Coach Woodson on Pall: “Mark comes from a baseball family, as his dad pitched in the major leagues for many years.  He is a lanky righty that knows how to pitch and we believe with some work in the weight room, he could develop into a special pitcher.”

Jake Perry (Webster Groves, Mo./Webster Groves) is a 6-foot-1, 200-pound catcher.  Perry is listed as the No. 64 prospect in the class of 2013 in Missouri by Prep Baseball Report and was named to the 2012 Perfect Game WWBA All Tournament team.  The four-year varsity starter was named All-Conference honorable mention this spring after hitting .296 with 7 doubles, 2 triples, and 15 RBIs on the season.  Perry is a member of the St. Louis Pirates Elite summer team and played for the New York Mets Scout Team this fall.  The Webster Groves High School team MVP is an outstanding student, as he has been recognized as a Scholar Athlete and the Renaissance Award recipient at his high school for the past three years.

Coach Woodson on Perry: “Jake is a strong catch and throw guy that has some juice in his bat.  He has played for one of the best summer programs in the Midwest with the St. Louis Pirates organization.  He has had a lot of success playing tough competition, which will be beneficial to our program.”

Chris Ramsey (Hilliard, Ohio/Hilliard Darby) is a 5-foot-10, 185-pound outfielder.  He is ranked No. 53 in Ohio by Prep Baseball Report and a 2012 Perfect Game Pre-Season All American Honorable Mention.  Ramsey was selected to the Ohio Crossroads Baseball Showcase for the top 90 juniors in the state this past summer, as well as the Buckeye State Showcase and  Blue/Grey Classic in North Carolina.  This past spring, he led his team with a .352 batting average, .426 on-base percentage and 31 hits, including 10 doubles.  He earned All-District and All-Conference honors for the second straight year.  As a sophomore, Ramsey broke three Hilliard Darby single-season offensive records with 42 hits, 37 runs scored, and 5 triples and established the third-highest single-season batting average in Hilliard Darby history with a .442 batting average.  During the summer, he plays for the prestigious U17 Cincinnati Flames travel team.

Coach Woodson on Ramsey: “We knew from very early on that we wanted Chris to be a part of our team.  His work ethic, passion for the game, and positive attitude is contagious.  Chris is a very good left-handed bat who can run and play all three outfield positions.”