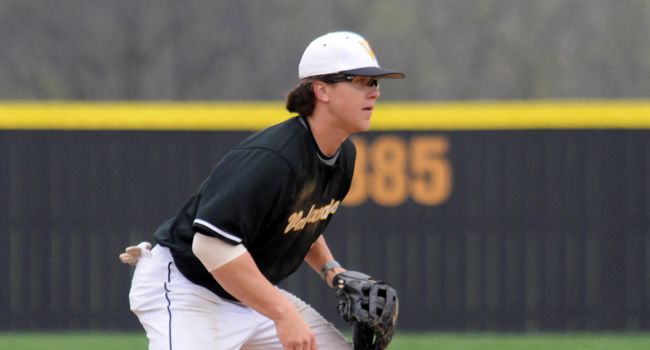 With three hits already on the day, middle infielder Tanner Vavra steps into the batter's box, measures off his distance from home plate with his bat, double-checks his batting gloves, taps his helmet and lowers his right arm to indicate to home plate umpire A.J. Lostaglio that he’s ready for the delivery from Arkansas reliever Barrett Astin.

Astin is just one of multiple Razorback arms that can effortlessly light up the Baum Stadium radar gun in excess of 90 miles per hour.  A slider that is pro-caliber makes this right-hander even more unforgiving.

Astin's first pitch to Vavra in the bottom of the 9th inning of a 4-3 game is inside off the plate.  Vavra remains stationary as the fastball glances off his protective elbow guard.  He tosses the bat towards the Valparaiso dugout and jogs down to first base, much to the chagrin of the rowdy and raucous Razorback faithful.  It was merely the first of 22 hit-by-pitches he drew in his first season at Valpo, a school record.

Amidst the 7,300-plus fans screaming like the wild hogs they call every home game as a tradition, one voice - with a particularly heavy southern twang - permeates throughout the pristine stadium in Fayetteville:

First-base coach Jeramy St. Clair can only exude an awkward cringe.  For Vavra, the wise cracks are nothing new.

This particular heckler is referring to Tanner Vavra's headshot on the scoreboard.  His right eye is shut in the picture as well as every other picture of his since the age of 10.

That's because the 23-year-old infielder from Menomonie, Wisconsin has only one functioning eye.  Yes.  One eye.  A young man playing one of the most difficult positions on the diamond for a Division I team is doing so without a right eye.

The gruesome chain of events unfolded as follows:  3 year-old Tanner and his dad, Joe, were standing on the shore of a lake in Washington state.  As the elder Vavra reached back to cast his lure into the water, Tanner took off running behind him.  Halfway through his cast, the hook inadvertently became lodged in Tanner's eye.  The momentum of the line carried forward, causing severe damage to the youngster's eye.

Four intricate surgeries followed. For the next seven years of his life, he was required to wear a patch.  Once it was no longer needed, a special contact lens provided 20/25 vision in his right eye.

His fickle fate had another coarse twist in store though.

Within months of having the patch removed, Tanner was poked severely in the eye during a pickup football game at a birthday party.  Another four surgeries later, doctors were able to reattach his retina to repair the eye, but his vision disappeared.  Now, any procedure is deemed too risky to salvage his eyesight.

While playing infield for the Albuquerque Dukes of the Class AAA Pacific Coast League in 1984, Joe Vavra had his thumb shattered by a runner attempting to steal second base.  The catcher's throw was low and Joe scooped it just as the runners' cleats came bearing down on the bag.  A complex surgical procedure gave him a reprieve.

But, like his son’s luck, that lasted only so long.

A couple years later, he was diagnosed with a rare, lung-debilitating disease referred to as desert fever in layman's terms.  The ailment cut his playing career short and meant his journey to the bigs would end one step shy at AAA Albuquerque.

Joe Vavra began coaching immediately once his playing days were cut short. In his 25 years of experience, he's worked as everything from a Division III head coach at the University of Wisconsin-Stout to Director of Player Development for the Los Angeles Dodgers to hitting coach of the Minnesota Twins.  Currently, he serves as an infield instructor and third-base coach for the Twins.

What manifested itself an occupational hazard for Tanner doubled as a blessing in disguise for Valparaiso.

From the bleachers, there's nothing askew about his play.  If anything, spectators would think his opponents are the ones at a disadvantage.

But it's what only he sees on the field that makes Vavra a special talent.  Whether it is taking third base off an opposing pitcher not paying close attention to his lead off second, or successfully completing a delayed steal on a catcher falling to a knee after receiving a pitch, the 6-foot senior is a stirring catalyst between the chalk.

"You can't teach his instincts.  They're some of the best I've coached at the college level.  It's almost as though he's a play ahead of most other guys," Woodson observed.

Numerous schools passed over the first-team Horizon League infielder, including Milwaukee.  Woodson and Valpo took the risk and now are reaping the rewards.

"I'm very thankful for the opportunity I've been given.  If someone overlooks me for my disability, that's their business, their decision.  But for the person that'll stick their neck out for me, I want to work even harder," Vavra said.

Entering his senior year, the draft looms on the horizon.  The idea of prolonging his playing days is something he admits to giving thought to pretty frequently.

"It'd be another chapter, another opportunity to continue to play the game I've worked at since I was a kid.  It would be a dream come true."

If drafted, he would be the first Crusader selected since Kyle Gaedele was taken in the 6th round of the 2011 MLB June Amateur Draft by the San Diego Padres.

Nevertheless, for the time being Vavra's attention is centered on Valparaiso.  He places lofty goals and ambitions on himself and a team that last season made an NCAA Tournament appearance for the first time since the Vietnam War.

"My goal for this team is to get further than we did last year, to be better than we were last year," Vavra said.

Woodson, who played professional baseball for 14 years and coached for eight, maintains a strong network of friends and former teammates still involved in pro ball including some within front offices.

"He'd be a great guy to have not only because of his skill, but his baseball IQ.  I've talked with a few scouts.  They put his odds of getting drafted at 50-50. Personally, I’d take him in my organization any day," Woodson remarked.

After the prognoses that doctors have delivered him since the age of three, Tanner Vavra will gladly take those odds.