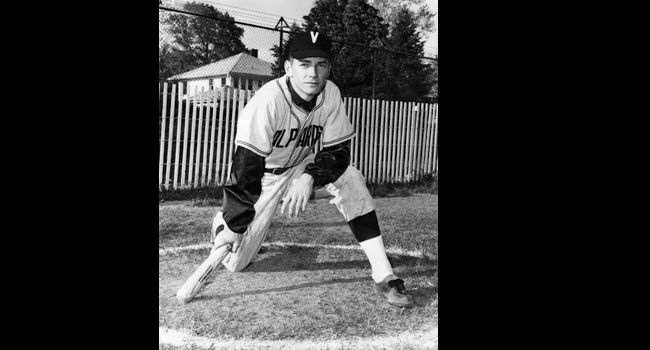 Jack Todhunter will be inducted into the Valpo Hall of Fame.

One of the top hitters in Valparaiso baseball history, Jack Todhunter will be inducted into the Valparaiso University Athletics Hall of Fame on Saturday, February 16.

Todhunter peaked as a senior with the Crusaders, as he was honored as a First Team All-American in 1963. He also received First Team All-Indiana Collegiate Conference recognition as he helped lead Valpo to the NCAA University Division Playoffs in 1963, earning All-Tournament accolades.

Todhunter finished his career sixth in Crusader history with a .364 career batting average, leading Valpo in average in each of his three seasons. He was named a Second Team All-Conference honoree as a freshman, hitting a personal-best .391 for the 1960 season. He also paced the Crusaders in runs scored in both 1961 and 1963, posting a 31-game hitting streak spanning the two seasons.

Following graduation, Todhunter signed a contract with the Minnesota Twins, hitting .444 with the Appalachian League's Wythville Twins in 1963. He then was invited to spring training with the Chicago White Sox in 1964, hitting .400 before suffering an injury which ended his career.

Todhunter, a 1963 graduate of Valparaiso University who also was a member of the Crusader bowling team during his time at Valpo, is a retired banker.

The Valparaiso University Athletics Hall of Fame Induction Banquet will be held on Saturday, Feb. 16 at the Athletics-Recreation Center in Hilltop Gym on campus. The banquet is slated to begin at 11 a.m. This year's inductees will also be recognized at halftime of both the men's and women's basketball games that day.