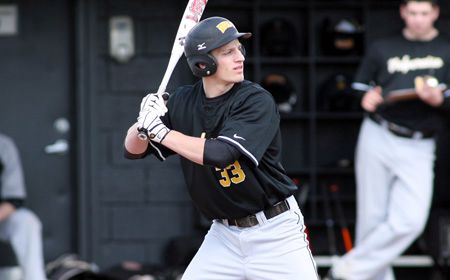 Michael Morman smacked a double Saturday afternoon as part of his second multi-hit game in as many days
Valparaiso at Ohio | February 16, 2013
Related Links
Related Links

Cole Webb made quite the first impression Saturday afternoon as Valpo defeated Ohio 1-0 at E.S. Rose Park in Nashville.

The transfer from Coffeyville Community College in Kansas was masterful in his Crusader debut, allowing just one hit, one walk while striking out four over eight innings.

While the Valpo offense stranded ten runners, the Bobcats never posed a legitimate scoring threat on Webb's watch.  Efficient as he was precise, the right-hander (1-0) needed just 98 pitches to dissect the Ohio lineup.

Redshirt junior Karch Kowalczyk earned his first save of the season as he worked around a leadoff walk to shut the door in the 9th inning.

Michael Morman recorded another multi-hit game as he had a 2-for-3 day.

The lone Crusader run came off the bat of John Loeffler in the top of the 4th inning.

Tanner Vavra led off the frame with a double down the left field line. Morman followed with a perfectly placed bunt down the third-base line.  With runners at first and third and no one out, Loeffler grounded into a 6-4 fielder's choice that plated the Crusader second baseman.

Marck Paliotto (0-1) took the loss for the Bobcats as the lefty went five innings, surrendering the one run on four hits and two walks.  Paliotto struck out five in the losing effort.

"What a great dabut for Cole.  Our defense was strong this afternoon as well," head coach Tracy Woodson said.

The win evens Valpo's record at 1-1, while Ohio fell to 0-2 after losing earlier in the afternoon to Belmont.

Chris DeBoo will make his Crusader debut on the hill tomorrow while the Bruins will counter with left-hander James Buckelew.  First pitch is scheduled at 1:00 pm.