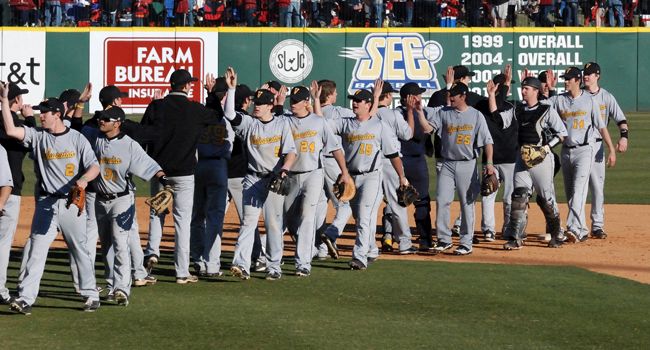 This Week in Crusader Baseball: After dropping two games to Belmont, but taking the middle game against Ohio in Nashville last weekend, Valparaiso returns to the diamond this weekend with a three-game series in Long Beach, California against the Dirtbags. Long Beach State enters the series with a 2-3 record, but against perhaps the toughest schedule. The Dirtbags took the series finale last Sunday at #2 Vanderbilt, and then split a two-game midweek series against the defending College World Series champion Arizona Wildcats.

On the Air: All three games will be broadcast online through longbeachstate.com. Live stats will be available through www.valpoathletics.com as well.

Head Coach Tracy Woodson: Tracy Woodson, the 16th head coach in Valparaiso University history, is in his seventh season at the helm of the Crusaders and has a 156-184 (.459) record both for his career as well as at Valpo. Woodson ranks third in school history for career wins by a head coach. A member of the Los Angeles Dodgers 1988 World Champion team, he has also managed in the minor leagues through the AAA level.

Series Notes: Friday night’s game will be the first ever between Valparaiso and Long Beach State.

Looking Back: Valparaiso finished 2012 with a 35-25 record overall and a 22-8 mark in the Horizon League. The Crusaders took first place in both the regular season and Horizon League Tournament in Chicago before they made their first NCAA Tournament appearance in 44 years. Long Beach State finished 2012 with a 28-27 overall record and a 15-9 conference record, good for 3rd place in the Big West, two games behind champion Cal State Fullerton. Long Beach State lost to the Titans in a winner-take-all tilt in the Big West Conference Tournament Championship Game. The Dirtbags’ team earned-run average of 3.08 last season was 17th-lowest in the nation in 2012.

Scouting Long Beach State: The Dirtbags currently stand at 2-3 overall, with a road win over #2 Vanderbilt, and a home win versus #10 Arizona. Troy Buckley is in his third season as head coach at Long Beach State after serving as pitching coach from 2001-2008 and Minor League Pitching Coordinator with the Pittsburgh Pirates for two seasons. Entering Tuesday’s game against Arizona, the Dirtbags were hitting .283 as a team through three contests. Junior infielder Michael Hill had recorded two triples as part of a .444 overall average. The Dirtbags will feature three new weekend arms in 2013, a year removed from a rotation in which all three members sported sub-3.00 ERAs.

Patience, Patience: The first time through the weekend rotation, Shane Carle, Jon Maciel, and Landon Hunt issued eight free passes in 13 1/3 innings. The Dirtbags had recorded more walks (18) than strikeouts (16) prior to Tuesday’s game at Arizona.

What’s in a Name? The Dirtbags nickname came to be in 1989 when then head coach Dave Snow used the term to refer to the team’s style of play and success against more highly-touted programs. The ‘89 Long Beach squad were ships without a port, rotating between three fields, even using a local little league complex with an all-dirt infield for practices. The infielders would return to the regular practice facility covered in dirt. That team won its first 18 games, advanced to the College World Series for the first time in school history, and a nickname was born.

On the Road: Valpo will play its first 19 games away from home before finally returning to Emory G. Bauer Field on March 23 to host Roosevelt. After this weekend, Valpo’s travel has the Crusaders hopping on a bus to Port Charlotte, Florida for single games against St. Bonaventure, Northeastern, Georgetown, Villanova and Toledo before facing South Florida for a threegame set and Navy, Yale, Bucknell, UAB, and Miami (OH) for single games in Winter Haven, Florida.

Et Cetera: This weekend is one of only two flights for the Crusaders. The other will come in April when Valpo flies out to Phoenix for the Arizona State series ... While this is the first matchup between Valpo and Long Beach State, the Crusaders made a California swing in 2011 where they went 1-8 against Cal State Northridge, Cal State Bakersfield, and Cal Poly.