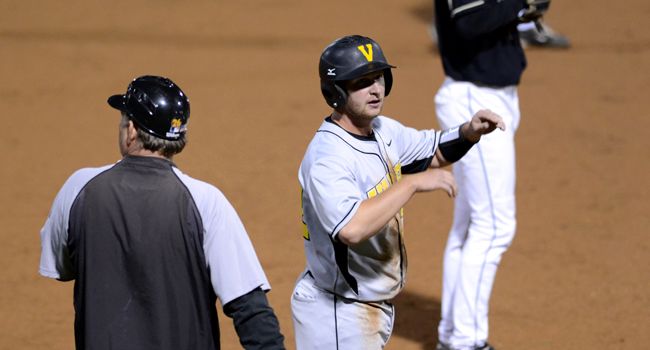 Oddly reminscient of the opening game of the NCAA Regionals last season against Purdue, the four errors - all committed on the infield - were a season high.

The game got off to an ominous start as the first four Dirtbags reached base via three hits and a leadoff walk to Colby Brenner.  With a 1-0 lead, the bases loaded and Richard Prigatano at the plate, Long Beach had a chance to jump out to a commanding lead inside spacious Blair FIeld.

Prigatano got caught looking for the first out of the game.  Senior Kyle Wormington next issued a run-scoring walk to Jeff Yamaguchi to extend the Dirtbag lead to 2-0.

Again on the ropes, Wormington two-stepped out of trouble when catcher Eric Hutting grounded into an inning-ending double play.

The Crusaders used the slight bit of momentum the very next inning when California-native Chris Manning led off the 2nd inning with a basehit through the right side.  Manning then swiped his first bag of the season, putting him in scoring position for the potent bats of Spencer Mahoney and Elliott Martin.

Mahoney flied out to left field, and Martin lined out to third base keeping Manning on second base with two outs.

It appeared to be an opportunity squandered when Billy Cribbs hit a ground ball to Long Beach shortstop Michael Hill. However, Hill committed his third error on the young season, allowing Manning to come around and score, cutting the Dirtbag lead in half 2-1.

The Crusaders tied the game at 2-2 in the 4th inning when Cribbs, a fifth-year senior, ripped an RBI double off the wall that plated Mahoney. Cribbs' two-bagger raised his average to .364.

The Dirtbags responded with two runs of their own in the bottom half of the 4th.  Hutting led off the inning with an infield single. Wormington retired the next two hitters, but the inning was extended via a John Loeffler error.

Valpo gift-wrapped another scoring chance on the very next play when second-baseman Tanner Vavra made a throwing error, loading the bases.

Third-baseman Juan Avila hit a 2-1 Wormington delivery for a double into left field scoring two Dirtbags.  Vavra redeemed himself on the next play when Ino Patron grounded out to him, but the damage had been done.

Once given his second two-run cushion of the game, Long Beach starter Shane Carle (1-1) settled in.  The righty finished the night surrendering two runs - one earned - on seven hits, walking one, while striking out six Crusaders.

Long Beach State added a three-spot in the 6th inning thanks in part to a Jeff McNeil single to right field that scored two runs.  The seventh and final run came across when Vavra committed his second error on the back-end of a double play. The error allowed Brenner to score, who had reached on a hit-by-pitch.

Senior Mike Jacobs made his third appearance in four games and continued his scoreless streak working 1 2/3 innings, striking out two.

Freshman Trevor Haas got his feet wet working a scoreless 8th inning on the hill.

Senior Andrew Bain notched his first multi-hit game of the season with a 2-for-5 performance.  Bain has hit safely in all three games he has played thus far for the Brown and Gold.

With the loss, Valparaiso falls to 1-3 overall.  Long Beach State improves to 3-3.

Junior Cole Webb (1-0, 0.00) gets the ball for Valpo as he looks to replicate his lights-out start last Saturday in Nashville versus Ohio.  The Crusaders will see their fourth lefty in five games when Landon Hunt (0-0, 14.54) makes the start for the Dirtbags.