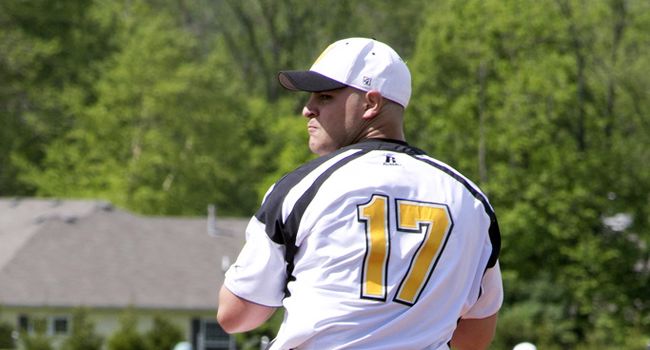 Ben Mahar and the Crusader pitching staff take their 3.31 team ERA to Florida from Saturday until March 16th.
Related Links

This Week in Crusader Baseball: After a disappointing series in Long Beach, Valparaiso begins its 17-day trip to the Sunshine State. The Crusaders will play 13 games on the Florida swing; ten neutral-site games against predominantly northern teams and three against South Florida. Five games will be played at Port Charlotte, three in Tampa against the Bulls, and the final five will take place in Winter Haven.

On the Air: No games will be broadcast while in Port Charlotte, Florida.

Head Coach Tracy Woodson: Tracy Woodson, the 16th head coach in Valparaiso University history, is in his seventh season at the helm of the Crusaders and has a 156-187 (.455) record both for his career as well as at Valpo. Woodson ranks third in school history for career wins by a head coach. A member of the Los Angeles Dodgers 1988 World Champion team, he has also managed in the minor leagues through the AAA level.

Probable Starters: Senior RHP Kyle Wormington (0-2, 3.09) will take the ball in the first game of the 13-game trip for the Crusaders. Junior RHP Cole Webb (1-1, 1.80) will answer the bell for Valpo in the Sunday game against Northeastern. The Monday tilt will see RHP Chris DeBoo (0-2, 6.00) take the hill for the Crusaders versus Georgetown. Freshmen RHP Trevor Haas (0-0, 0.00) and LHP Dalton Lundeen (0-0, 0.00) are currently projected to make their first career starts Tuesday and Wednesday respectively.

Series Notes: The Crusaders are 1-1 all-time versus St. Bonaventure, with the last meeting in 2010. Sunday’s game will be the fifth time Valpo and Northeastern have met. The Crusaders aim to score their first ever win over the Huskies. Valparaiso will take on Big East member Georgetown and Villanova for the first time in school history. The Crusaders won the only contest ever against Toledo in 1996.

Scouting the Opposition: St. Bonaventure currently stands at 2-3 overall. After five games, the Bonnies registered a 9.20 team earned run average. The staff had walked more batters (35) than they have struck out (34). The offense is hitting .286 as a team led by Jason Radwan, who is 13-for-24 (.542). No Bonnie has hit a triple or a home run yet.

Northeastern is 2-4 through its first six games, with wins over Houston and UT-Arlington on the road. The Huskies boast two starters hitting over .400 - Aaron Barbosa (.458) and Jason Vosler (.423). Conversely, four regulars carry a batting average of .217 or below. The starting pitcher for Sunday’s game has yet to be announced, but Nick Berger leads the hurlers with a 1-1 record to accompany a 2.45 ERA.

Georgetown is also 2-3, both wins coming in the Davidson Tournament over the host Wildcats and Lafayette. The Hoyas had committed 10 errors through their first four games. The pitching staff sports a 2.97 ERA. Jack Vander Linden is 1-0 with a 2.79 ERA, though he has issued six walks in 9 2/3 innings. Danny Poplawski owns a team-best .533 average (8-for-15) as well as the team watermark in doubles with four.

Villanova’s lone win came over La Salle on February 23rd. Two of the Wildcat losses have been by one run; one to Wagner, the other to Monmouth. Villanova’s offense has stumbled out of the gates evident by a .222 team batting average and a .274 team slugging percentage. Tyler Sciacca has been a force at the plate with nine hits in 17 at-bats. The senior second-baseman is on the radars of MLB scouts, though Sciacca has four errors in four games. Both Pat Young and Josh Harris have stepped up so far for the Wildcats on the hill.
Harris is 1-0 with a 3.00 ERA; Young has yet to factor into a decision, but carries a 3.18 ERA, despite opponents hitting .356 against him.

Toledo is coming off a weekend sweep at the hands of the Virginia Cavaliers, including shutouts on Friday (15-0) and Saturday (5-0). The Rockets notched a win versus Delaware, its only so far. While the staff has recorded a pedestrian 6.00 team ERA, Kyle Shaw has pitched like an ace. The senior southpaw has thrown 12 innings, allowing just one run on seven hits and two walks to go with eight strikeouts. Anthony Smith has paced the Rocket offense with a .368 average. Zack Michael is the only other Rocket currently hitting above .300, though Ben Hammer has drawn four walks as part of a .409 on-base percentage.

Et Cetera: The Crusaders have gotten four quality starts in their six games, but only one win to show for it. Valpo will be without Sean Kennedy for the Florida trip. The left-hander is experiencing shoulder discomfort. His return for the beginning of Horizon League play on March 22nd would be a highly optimistic scenario ... Valpo set up the rotation for the Port Charlotte stop so that the weekend rotation of Wormington, Webb, and DeBoo will be in cadence with the South Florida series.