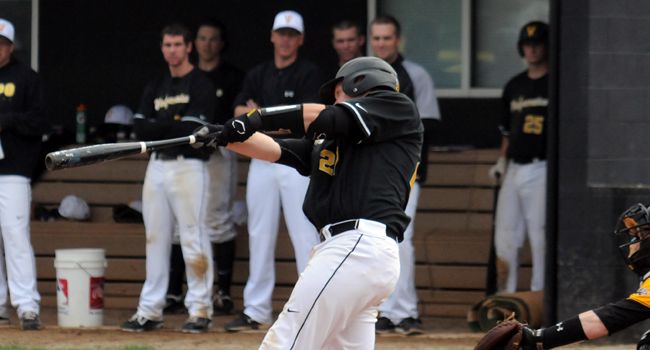 Junior Cole Webb didn't allow a hit until the sixth inning, but Northeastern (5-4) scored one in the sixth, seventh, and eighth innings as Valpo (2-6) dropped the second game on the spring trip 3-1 Sunday.

Sophomore Spencer Mahoney scored the lone Valpo run in the second inning.  Mahoney scorched a line drive off the glove of first baseman Rob Foncesa that allowed for a double.  With Chris Manning at the plate, Mahoney stole third base standing up. Manning then got called out on strikes for the second out of the inning.

Senior Billy Cribbs didn't let the opportunity go to waste though.  He delivered an RBI single to left field for a 1-0 Valpo lead.

Webb was especially sharp early on as he retired the first 13 Huskies in succession.  Northeastern outfielder Brad Burcroff broke the streak with a one-out walk in the fifth inning.  Webb responded by coaxing a double play groundball off the bat of Connor Lyons.

Catcher John Puttress broke up Webb's no-hit bid in the sixth inning with a crisp leadoff single to left field.  A wild pitch scooted Puttress up to second base.  Webb got the next two batters to fly out to center field.  With Puttress on third base, leadoff hitter Aaron Barbosa ripped a 1-1 fastball off the right field fence for an RBI triple.

The Huskies nearly took the lead on the very next play when Michael Foster hit a shot up the middle.  Crusader second baseman Tanner Vavra made a diving play to his right, got up, and threw Foster out to strand Barbosa at third base and keep it a 1-1 game.

Webb was breezing through the heart of the Husky order in the 7th inning when Burcroff, Lyons, and Puttress all strung together two-out singles.  Puttress's second hit of the day plated Burcroff, the eventual game-winning run.

First baseman Andrew Bain led off the top of the 8th with a single.  Vavra laid down a sacrifice bunt to move him to second.  Husky skipper Neil McPhee lifted the southpaw Ferguson for righty Michael Fitzgerald.  Fitzgerald got Michael Morman to ground out to second, and third baseman Elliott Martin followed with a fly out to center, stranding Bain.

Northeastern made it a 3-1 game in the bottom of the 8th inning when Barbosa single-handedly manufactured an insurance run.  The outfielder walked and promptly stole second.  Home plate umpire Mark Spicer called a balk on Crusader reliever Zack Walsh to advance Barbosa to third base.  Foster hit a chopper to short that gave Barbosa enough time to score as Mahoney's only play was to retire Foster at first.

Fitzgerald worked a perfect 9th inning for his first career save.  Kevin Ferguson (2-1) tossed 7 1/3 well-pitched innings for Northeastern, earning his second win of the season in the process.  The lefty threw exactly 100 pitches on the afternoon, 70 of them for strikes.  He scattered six hits, walked none, and struck out five Crusaders.

It was another unjust loss for Cole Webb, whose record slid to 1-2.  His final line read: seven innings, five hits, two runs, one walk, and four strikeouts.  The junior's ERA actually increased to 2.05 with the outing, a testament to his outstanding work to date.  Webb's WHIP currently sits at an attention-grabbing 0.64.

"I liked the way we swung the bats.  We had some hard hit balls that were right at guys.  But we didn't have enough intensity throughout the game today," head coach Tracy Woodson said afterwards.

Valparaiso's record fell to 2-6.  They take on the Hoyas of Georgetown University (3-3) tomorrow at 11:00 am Eastern/10:00 am Central at North Charlotte Regional Park.

Northeastern improved to 5-4 with the victory.