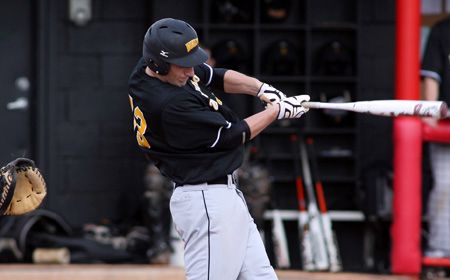 Outfielder Michael Morman had a double as part of a 2-for-4 day Wednesday
Valparaiso at Toledo | March 06, 2013
Related Links
Related Links

Valparaiso took a rare first-inning lead Wednesday morning against Toledo (3-7), but sixteen hits fueled the Rockets to a 9-8 win.

Things looked up as Tanner Vavra tripled home Spencer Mahoney in his first at-bat against starting pitcher Alec Schmenk (1-0).  Vavra scored on the next play when Andrew Bain sprayed a sacrifice fly to right field.

Freshman Trevor Haas (0-1) kept the momentum in the Crusader corner in the first inning of his first collegiate start.  He got three groundball outs in a 1-2-3 frame.

Toledo took a 3-2 lead in the second inning when an infield error, an RBI groundout and a Lucas Sokol basehit plated three Rockets.

Schmenk kept the Valpo bats at bay after the rocky first frame.  He lasted five innings, allowing the two runs on hits, two walks and struck out two.

Haas was working towards a perfect 4th inning when he got Toledo second baseman Zack Michael to roll over for what would have been the third out of the inning.  Instead, the throw got away from Mahoney and allowed Michael to reach first base.  Sokol reached base on a hit again before shortstop Deion Tansel grounded out to end the inning.

As a result, instead of facing the eighth, ninth, and first-place batters in the 5th, the error allowed the bottom of the lineup to clear, turning it over for leadoff batter Tyler Grogg to start up the next frame.

True to form, Grogg led off with a single.  Toledo skipper Cory Mee put on the hit and run and designated hitter Matt Delewski executed in perfectly, grounding a ball to the shortstop position made vacant when Mahoney went to cover second base.  Haas spiked a curveball to Ben Hammer, allowing Grogg to score and Delewski to advance all the way to third base.  Later in the at-bat, Hammer recorded an RBI single.

Haas was pulled after allowing the hit to make it 5-2.

Right fielder Jacob North corked a double off Crusader reliever Zack Walsh that scored Hammer and Toledo cleanup hitter Anthony Smith. Walsh got Tansel to ground out to Mahoney with two runners on to end the 18-minute, perilous 5th inning.

After falling behind 7-2, Valpo scored an unearned run when Smith, the Toledo third baseman, commited couldn't come up with a Billy Cribbs chopper.

With Bryce Hara representing the tying run at the plate, the junior bounced a ball up the middle that Michael gloved, stepped on second for the force out, and fired to first for a bang-bang play that first base umpire Kevin Conder punched out Hara on.

Valpo made it a 7-4 game in the top half of the 7th when Vavra flipped a single to right field that scored Chris Manning.  Manning had led the inning off with a double down the left field line.

The Rockets got one back in their half of the 7th as Sokol recorded his third of the day, a single off reliever Drew Hasler that brought in Smith.

Toledo extended their lead back to four runs in the 8th when Grogg scored his second run of the game on a Hammer sac fly.  Grogg had three hits to go with his two runs scored.

Trailing 9-4, it got awfully exciting in the Valpo 9th when Hammer was called in to pitch.  The lefty got pinch hitter Kyle Schneider to ground out to first base before losing command and walking three straight Crusaders.  With the bases loaded, Elliott Martin singled through the left side, bringing in Vavra.

Michael Morman followed with a basehit to left field.  Ryan Callahan who had entered the game as a pinch runner in the top of the 9th - and was subsequently picked off first base - stayed in the game in left field and bobbled the ball allowing Karch Kowalczyk to score and Martin to move up to third.

A Billy Cribbs groundout scored Martin and moved Morman to third base.

The right-handed Andrew Bynum was called on to pinch hit for the lefty Hara but Bynum swung through three Hammer fastballs to end the game with the tying run 90 feet away.

The loss moves Valparaiso's record to 3-8.  Valpo will have Thursday off to prepare for a three-game set with South Florida beginning Friday.