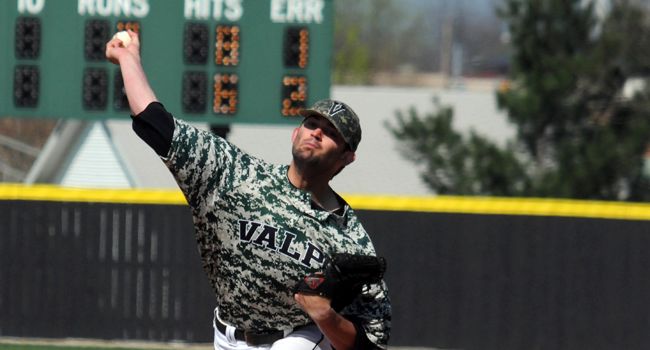 Valpo applied pressure on Bucknell and the Bison folded in a 6-2 Crusader victory Thursday afternoon in Auburndale, Florida.  In a neutral-site tilt between two schools that have received considerable ink as of late for their achievements on the hardwood, Bucknell (4-11) committed three errors in the four-run Valpo victory.

For the third straight game Valpo opened the scoring with a crooked number, plating three runners in the home half of the 5th.

Bryce Hara led off the frame with a basehit to center field.  Mark Johnson drew a walk to set up a sacrifice situation for Andy Burns.  Burns laid down the bunt which third baseman Travis Clark threw away.  Hara scored, Johnson advanced to third and Burns trotted over to second base.  Freshman Jake Hanson hit a sacrifice fly to center on the first pitch to bring in Johnson.

Three batters later, designated hitter Andrew Bain smacked a ball to left center for a hit.  Spencer Mahoney and Tanner Vavra were running on the pitch. and Mahoney scored easily before an effective relay throw erased Vavra at home by a few steps.

Valpo stockpiled three more runs the following inning.  First baseman John Loeffler opened with a walk.  Chris Manning followed with a perfectly placed bunt down the third base line. Clark made a barehanded play and threw on to Rob Krentzman, but the first baseman couldn't squeeze it as the ball caromed down the line into foul territory.  Loeffler advanced to third and Manning to second on the play.

Hara sent a sac fly into center field that deflected off the glove of a sliding Corey Furman.  Both runners scored on the play and Hara slid in to third base with no outs.  Mark Johnson singled home Hara the very next Crusader at-bat, busting the game open at 6-0.

Wormington (1-3) was coasting through the Bucknell lineup until the 8th inning.  The right-hander retired the ninth-place batter before allowing a double to Furman, the leadoff hitter.  The double was Furman's fourth hit of the game. Wormington got the next man out on a groundball back to the mound.  The next four Bison reached base and head coach Tracy Woodson saw his team's six run lead shrink to 6-2.

Ben Mahar was called upon to work out of the bases-loaded jam.  The sophomore answered the bell, getting Krentzman to fly out to center to end the threat.

Mahar worked an uneventful 9th inning for his first save of the season.

Wormington earned his first win of the season while lowering his ERA to 3.09.  He threw 7 2/3 innings, allowing five hits, one walk, and struck out four in the 6-2 victory.

The .500 mark is now on the horizon for the Crusaders as they improve to 7-10.  Cole Webb will make his fifth start for Valpo Friday morning against the University of Alabama-Birmingham Blazers.  The junior is 2-2 with a 1.86 ERA. First pitch is scheduled for 11:00 am ET/10:00 am CT.