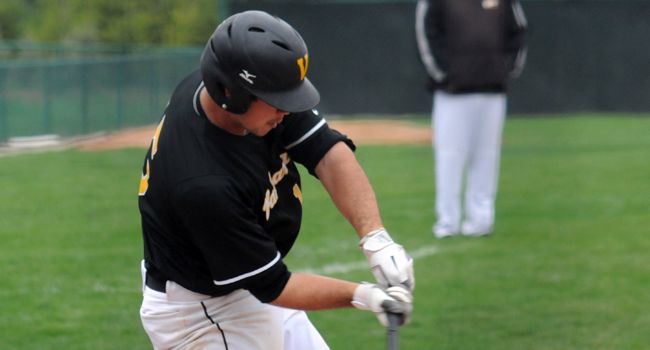 Elliott Martin was 2-for-4 with a home run and two RBIs Saturday.
Valparaiso at Miami | March 16, 2013
Related Links
Related Links

It was by no means a pretty ending, but Valparaiso held on for a 9-6 win over Miami of Ohio Saturday in Winter Haven.  The victory gave Valpo a winning record on its spring trip and improved their overall record to 8-11.

The Crusaders scored seven runs between the 2nd and 5th innings, highlighted by a three-run shot off the bat of Elliott Martin in the 3rd frame.

Chris DeBoo shut the Red Hawks (7-8) out through seven innings before allowing three straight baserunners to kick off the 8th inning.  A walk to Matt Honchel signaled the end of DeBoo's day.  The three runners scored later in the inning, moving his final line to seven innings, five hits, three runs, two walks and two strikeouts.

Mike Jacobs, Bryce Yoder, and Ben Mahar worked the 8th and 9th, pitching around three Crusader errors in the process.

Mark Johnson got the start in left field and reached base in four of five plate appearances, adding two doubles and a stolen base to his stat sheet.

DeBoo advanced to 1-4 on the season while producing Valpo's seventh quality start in the last eight outings.

Valparaiso will open at home Wednesday afternoon against Roosevelt at 3:00 pm.