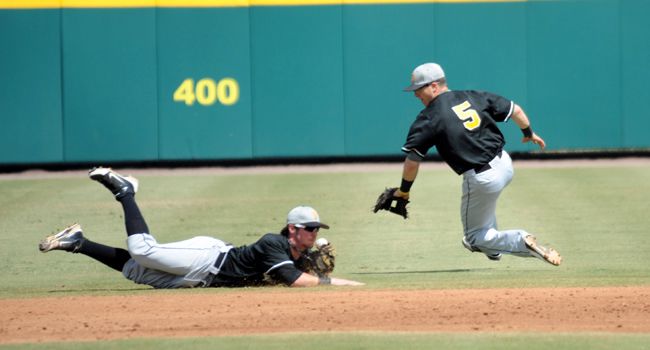 It's difficult to sweep any team in a doubleheader, but the Milwaukee Panthers did just that as they completed the series sweep against the defending Horizon League Champion Valparaiso Crusaders Saturday in Chicago.

In the first game, Milwaukee (11-11, 7-2) scored three runs off Valpo starter Chris DeBoo in the 1st inning.  A Michael Porcaro RBI groundout gave Milwaukee a 1-0 lead after three Panther plate appearances.  Freshman catcher Mitch Ghelfi followed with his first of seven hits on the day before Panther first baseman Ryan Solberg hit a moon shot into the jet stream blowing out to left field that carried over the wall.  The two-run homer was Solberg's second of the season.

Down 3-0, Valpo got two runs back in the top half of the 2nd inning when Billy Cribbs knocked a two-run single to left that scored Chris Manning and Bryce Hara.

The Panthers tacked on a run in the bottom of the 5th thanks to a Mitch Ghelfi double that landed on the left field line.  The two-bagger brought in Porcaro from second base.

While the Crusaders chipped away at the two-run deficit in the top of the 7th via a John Loeffler RBI single, it was one step forward and two steps back after that.  Milwaukee responded with two runs off DeBoo (1-5, 5.05) in the bottom half of the 7th inning to extend its lead to 6-3.

Cribbs added his third RBI of the game in the 8th as part of a two-run inning, but the Panthers added a cushion run in the bottom half for a 7-5 lead.  7-5 was the final as Joshua Uhen worked a perfect 9th inning for his second save of the season.

Milwaukee cruised to an 8-2 victory in game two thanks in part to a disastrous 5th inning for Valpo.  The Panthers brought ten men to the plate, ripped five hits and took advantage of two Crusader errors.  By the time the smoke cleared, Milwaukee was ahead 8-0.

Mike Schneider (4-1) kept Valpo off balance most of the evening striking out ten Crusaders in 7 2/3 innings.  His only blemish was an unearned run scored in the top of the 6th inning.

Kyle Wormington (1-5) struggled in his second straight outing.  The senior didn't make it out of the 5th inning as the Panthers tagged him for eleven hits in 4 1/3 innings pitched.  Six of the eight runs scored on his watch were earned.  Wormington's ERA has climbed by a little more than two runs in his last two starts.

The home opener is scheduled for Monday afternoon.  First pitch is set for 3:00 pm at Emory G. Bauer Field.