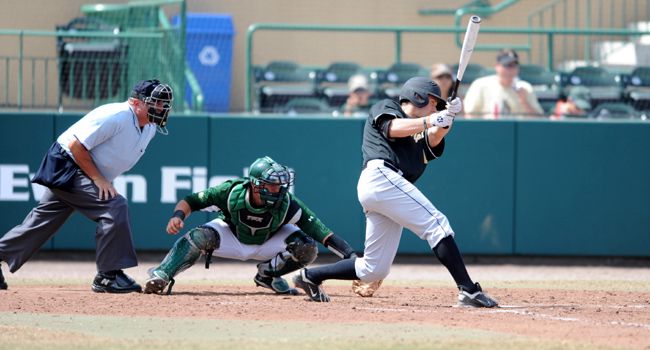 The Broncos got to Trevor Haas early as cleanup hitter Jared Kujawa singled home two runners with a base hit through the right side in the 1st inning. Haas had hit the leadoff batter before Theo Piccirilli ripped a base hit up the middle.

Valpo answered with a two-spot of their own in the top of the 2nd. Spencer Mahoney and Kyle Schneider reached on back-to-back infield errors with one out.

Billy Cribbs blooped a single behind the pitcher's mound to load the bases. After an Andy Burns' infield fly, Andrew Bain raised his average with runners in scoring position to .472 with a single to left. The game-tying base hit gave Bain a team-high 17 runs batted in.

John Loeffler stroked a Will Nimke delivery deep to right field for his second home run of the season to give Valpo a 3-2 lead in the visitor's half of the third. The round-tripper extended Loeffler's on-base streak to 25 games.

Western Michigan regained the lead in the 4th thanks to two gift-wrapped runs.

Haas issued a walk to the leadoff batter Brandon Cable. After a sacrifice bunt advanced Cable to second, Haas hit his third batter of the afternoon to create a two-on-one-out scenario.

Back-to-back singles by Vinnie Booker and Piccirilli brought in two runs. Piccirilli finished the day 4-for-4.

Valpo pushed a run across in the 6th via a Kyle Schneider sac fly to right field.  The RBI was the sophomore's seventh in eight starts.

Ryan Kennedy provided Valpo with 2 1/3 shutout innings before the Broncos put up a run on him in the bottom of the 7th.

Piccirilli and Andrew Sohn both recorded hits before Jared Kujawa sacrificed them into scoring position.

Western Michigan skipper Billy Gernon put on the suicide squeeze with Hunter Prince at the plate. The bunt landed just out of the reach of a diving Kennedy.

Piccirilli crossed home plate to give Western Michigan a 5-4 advantage.

The lead held as reliever Casey Hall worked perfect eighth and ninth innings for the Broncos.

They return to the diamond Wednesday afternoon against Roosevelt. First pitch is set for 2:00 pm at Emory G. Bauer Field.

Freshman Drew Hasler will take to the hill for the Crusaders.