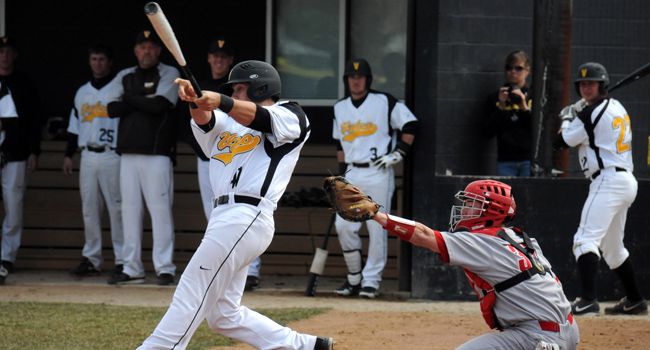 Kyle Schneider continued his hitting rampage Wednesday as he went 2-for-5 with three runs batted in versus Roosevelt
Roosevelt at Valparaiso | April 17, 2013
Related Links
Related Links

By the time the rain started to fall at Emory G. Bauer Field, the Roosevelt Lakers pitching staff had already experienced the storm.

Valparaiso (14-21) set season-high watermarks in runs and hits as the Crusaders distributed a 15-3 thumping over the Lakers Wednesday.

Six Crusaders had multi-hit games while four knocked in at least two runs.

Valpo scored early and often as Bryce Hara came in on a John Loeffler single to right field for the first run of the game. Chris Manning followed with an RBI ground out to short to make it 2-0.

Kyle Schneider recorded his first of two hits on the day in the 1st inning to plate Loeffler. Wednesday was Schneider's third multi-hit game in the last week.

The Crusaders added single tallies in the second and third frames thanks to a Hara sac fly and a Jake Hanson RBI single.

Drew Hasler (1-0) made his first career start as a Crusader. The freshman resided in the strike zone all five innings he tossed, neither walking a batter nor getting to three balls in any count.

His lone blemish came in the top of the 4th when Laker first baseman Ryan Pacyga deposited a fastball over the left field fence to trim the Crusader lead to 5-1.

Valpo put the game out of hand with a six-run 5th inning.

Andrew Bynum started the onslaught with a leadoff double to right center.  Valpo followed with five more hits capped off by a two-run single from Schneider.

Loeffler added a two-run double in the 6th for the 14th and 15th runs. He finished the day 3-for-5 with two runs scored and four runs batted in.

Tanner Vavra was a perfect 3-for-3 with three runs scored.

The Crusaders will quickly pack their bags as they depart Thursday morning for Tempe as a three-game series awaits them in Arizona.