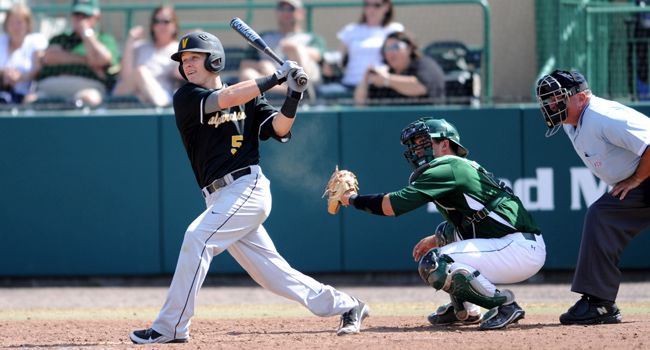 Seven innings of tight baseball were overshadowed by a disastrous nine-run bottom of the 8th in Friday's series-opening 16-3 loss to #9 Arizona State.

Sun Devil starting pitcher Trevor Williams entered with plenty of pomp and circumstance surrounding him. The MLB draft is a fait accompli for the junior, but Friday night he fooled few batters as the Valpo offense scored three runs off him on nine hits.

The Crusaders scored first in the top of the third thanks to a two-run single from Chris Manning. Bryce Hara had started the inning with a leadoff walk.

Tanner Vavra took a Williams' fastball off the elbow to create a sacrifice situation for John Loeffler. The senior laid a picture-perfect bunt down the line towards first base that advanced both runners.

With Hara and Vavra both in scoring position, Manning laced a ball past Michael Benjamin's glove at third for the 2-0 lead.

Valpo saw its lead vanish into the Tempe night on a quirky play in the home half of the third inning. RJ Ybarra led off the frame with a hard-hit single down past a diving Andy Burns at third.

Drew Stankiewicz followed with a drive to left center that left the center fielder Hara completely befuddled. The ball bounced against the fence before Hara could spot it. By that time, left fielder Kyle Schneider had raced over to throw it in to the cutoff man Spencer Mahoney.

Stankiewicz was on third base as the ball reached Mahoney. The Valpo shortstop bobbled the catch allowing Stankiewicz to score on the triple and error.

A walk and a single followed before the Sun Devils took a 3-2 lead on their first of what would be three runs scored via the sacrifice fly.

Arizona State (23-11-1) pushed a run across in the 4th off Valpo starter Cole Webb on a Ybarra base hit. The single plated Trever Allen.

Valpo appeared in be store for a big inning in the 5th after Williams allowed a Loeffler sandwiched between two walks.

With the bases loaded and zero outs, Mahoney lifted a ball into left that was caught before Vavra tagged and scored.

Williams recorded his first - and only - strikeout of the game against Schneider in the next at-bat.

With runners on first and second base and two down, Billy Cribbs singled into left.  Loeffler was waved in but a strong throw from Jake Peevyhouse just beat the Valpo first baseman in a bang-bang play at home plate.

The Sun Devils tacked on two runs in the fifth and one in the sixth to augment their lead to 7-3.

A nightmare nine-run 8th inning that began with a home run and ended with the third pitcher of the inning getting the third out, made an otherwise competitive game appear to be a slaughter.

Darin Gillies, Matt Dunbar, and Josh McAllister came on to record the final nine outs of the ball game. The trio combined to strike out six and allow three hits and no runs over the last three frames.