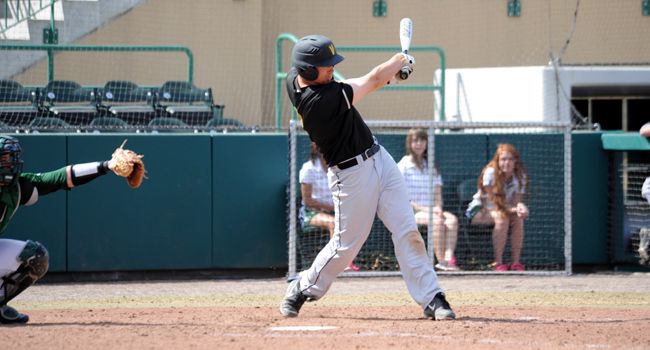 Unfortunately, Saturday's third inning brought back nauseating flashbacks of the implosion that had taken place fewer than 24 hours prior at Packard Stadium in Tempe, Arizona.

The 9th-ranked Arizona State Sun Devils scored eight times in the 18-minute frame en route to a 15-3 rout of the Crusaders.

Starting pitcher Chris DeBoo struggled with his command out of the gate, allowing the first two batters to reach by means of a walk and a hit by pitch.

Left fielder Jake Peevyhouse hit a two-out RBI single to right for the first run of the ballgame.

The Sun Devils added four on the board in the second inning.  The first two batters of the frame singled and walked before catcher Nathaniel Causey reached on an error by third baseman Kyle Schneider.

With the bases loaded and no outs, DeBoo coaxed a double play ball from leadoff batter Kasey Coffman.

Michael Benjamin and James McDonald both plugged the right-center field gap for back-to-back triples.  R.J. Ybarra added an RBI single to make it 5-0 in favor of Arizona State.

ASU put the exclamation point on the tilt in the third.

Seven of the eight batters DeBoo faced reached base including a bases-clearing grand slam off the bat of Ybarra.

After Ybarra's homer made it 12-0, the senior was lifted and freshman Trevor Haas entered to stop the bleeding.

Peevyhouse welcomed Haas to the game with a triple to right center. A Dalton Dinatale sac fly put the score at 13-0.

To the Crusaders' credit, they continued to work counts and battle against Sun Devil starter Ryan Kellogg.

Valpo put up single tallies in the fourth, fifth and sixth innings.

Andrew Bain scored on a bases-loaded double play to prevent the shutout in the visitor's half of the fourth.

Andrew Bynum led off the 5th inning with a double and later scored on Bryce Hara's RBI single to left field.

John Loeffler singled home Chris Manning in the top of the 6th for Valpo's third and final run.

As it did the previous night, the Arizona State bullpen threw up three zeroes in relief of its starter.

Karch Kowalczyk struck out three in 1 1/3 innings of scoreless work to sustain his perfect ERA.

Valparaiso (14-23) looks to salvage a game in the series in tomorrow's finale beginning at 2:30pm CT.

Freshman Dalton Lundeen (1-0, 2.70) will face a nationally-ranked team for the second time in his last three starts when he takes to the mound against senior Alex Blackford (4-0, 2.36).