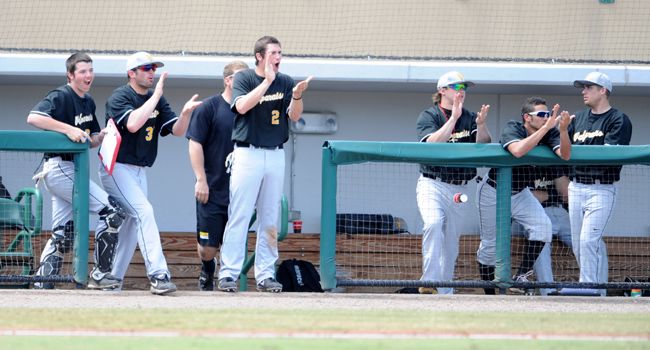 Just when it seemed to be same song, third verse in this series, the Crusader offense erupted for seven runs in two innings to shock the #9 Arizona State Sun Devils in an 8-6 victory at Packard Stadium in Tempe, Arizona.

"Offensively, I thought we hit the ball this weekend as well as any.  Today, especially, it all came together," head coach Tracy Woodson said.

The Sun Devils put two on the board before making an out in the first.

Leadoff batter Kasey Coffman doubled into center to start the Sun Devil half of the first frame.

Freshman Dalton Lundeen settled in to retire eight of the next nine batters he faced.

Billy Cribbs plated the first Valpo run with his 14th RBI of the year on a double to left field.  The extra-base hit scored Chris Manning and put Spencer Mahoney on third.

Andrew Bynum knotted the game at two apiece with an RBI ground out to short.

After Lundeen threw up a zero in the home half of the second, Valpo continued its assault on Sun Devil starter Alex Blackford.

Blackford retired Vavra, the leadoff man in the third, before plunking John Loeffler to extend his on-base streak to 29 consecutive games.

Manning, Mahoney, Cribbs and Bynum rattled off four straight singles before Andy Burns delivered the punch to the gut.

Burns laced a fastball off reliever Mark Lambson into the right-center gap for a two-run triple.

Burns was thrown out at the plate attempting to stretch the triple into an inside-the-park home run, but not before Valpo found itself up 7-2.

Despite the leadoff batter reaching in each of the middle three innings, Valpo was unable to push across any insurance runs until the 7th.

Manning raised his average to .301 in the Valpo half of the 7th with a leadoff double down the left field line.  Mahoney sacrificed him to third before a Darin Gillies wild pitch allowed Manning to race home.

Valpo took an 8-3 lead heading to the stretch.

The bottom of the 7th was Lundeen's last inning of work as he allowed two two-out singles before being lifted for Ben Mahar.

"Dalton showed a lot of poise and the ability to throw strikes. It was a great outing for a freshman," Woodson said.

Mahar allowed an RBI double to Trever Allen, his first batter, to cut the lead to 8-5.

Mahar returned the favor with a wild pitch of his own allowing Jake Peevyhouse to score, making it an 8-6 game.

With runners on first and third and two outs, Drew Stankiewicz hit a fly ball to left that Andrew Bain awkwardly caught for the final out of the 7th inning.

Mahar worked an efficient 8th inning before handing off the torch to closer Karch Kowalczyk.

Kowalczyk induced fly outs from the first two batters of the 9th before Peevyhouse singled to right.

The base hit brought Trever Allen, the Sun Devils' home run leader, to the plate representing the tying run.

Kowalczyk got ahead 0-2 before a collective gasp poured out from the crowd as Allen sent a towering fly ball to left that defensive replacement Mark Johnson squeezed for the final out.

The 8-6 win was Valpo's second against a top-10 team in as many seasons.  The victory was also the school's first against a Pac-12 team.

Valparaiso (15-23) will travel back to Indiana before facing Chicago State at home on Tuesday.  First pitch is slated for 3:00 pm.