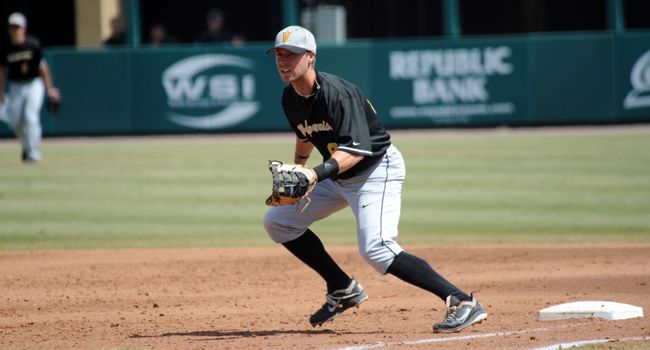 John Loeffler has reached base in 84 of his 91 starts as a Crusader. Valpo welcomes the Wright State Raiders to town for a three-game series beginning Friday. (Dave Schofield)
Wright State at Valparaiso | April 27, 2013
Related Links
Related Links

This Week in Crusader Baseball: After a thrilling upset over #9 Arizona State last Sunday, the Crusaders were rained out of both mid-week games on the schedule. The 8-6 victory over the Sun Devils marked the first ever win against a Pac-12 team and the second time Valpo has defeated a top-10 team in as many seasons. The Crusaders shocked the #4 Arkansas Razorbacks 10-9 last February at Baum Stadium in Fayetteville. This weekend signifies the second half of Horizon League play for the Valparaiso Crusaders.

Head Coach Tracy Woodson: Tracy Woodson, the 16th head coach in Valparaiso University history, is in his seventh season at the helm of the Crusaders and has a 170-205 (.453) record both for his career as well as at Valpo. Woodson ranks third in school history for career wins by a head coach. A member of the Los Angeles Dodgers 1988 World Champion team, he has also managed in the minor leagues through the AAA level.

Probable Starters: Senior RHP Chris DeBoo (2-6, 5.61) will take the ball Friday in the first game of the set for the Crusaders. Wright State will counter with RHP Casey Henn (3-5, 3.20). Saturday’s matchup will feature freshman LHP Dalton Lundeen (2-0, 3.78) opposite junior RHP Joey Hoelzel (3-2, 3.80). Neither team has announced a starting pitcher for Sunday’s tilt.

Series Notes: Wright State leads the all-time series 23-9. The Raiders won two out of three in last month’s series in Dayton. Valpo’s lone win in the series came via a 5-3 extra-inning victory in the finale. Last year, Wright State took the season series 4-2 with five of the six games decided by one run.

Scouting the Raiders: Wright State currently stands at 18-18 overall. The Raiders were rained out of all three games last weekend in Milwaukee. Wright State’s only series-opening win over a conference team came against Valpo last month. They are 10-6 since that series in Dayton, but 5-9 on the road overall.

The Raiders are #1 or #2 in virtually all offensive rate stats in the Horizon League. They’re 81st in the country in scoring with 5.8 runs/game. Wright State is also 65th in the nation in doubles per game and triples. Their .974 fielding percentage is good for 42nd in Division I, and their .410 slugging percentage is ranked 55th.

Casey Henn gets the ball Friday for Wright State. Despite an uninspiring 3-5 record, Henn is a top-flight starting pitcher in the Horizon League. The senior had two stellar starts to kick off the conference schedule but has been hit hard in his last two HL outings. Henn averages just a shade under one strikeout per inning, and has 16 walks in 59 frames. His 3.20 ERA is the lowest in the Raider rotation and 5th-lowest in the Horizon League. His last win came against Valpo on March 22nd when he threw 7 1/3 innings and allowed just one earned run.

Valpo will face right-hander Joey Hoelzel Saturday. The Crusaders chased Hoelzel in the 5th inning of his start in Dayton last month. He’s floated between the bullpen and the rotation, amassing 45 innings total. Hoelzel has walked 28 batters in that time, yet his opponents’ batting average sits at .226. Base stealers enjoy an 80% success rate versus the right-hander.

Both Kieston Greene and Mark Fowler are making valid cases for Newcomer of the Year, though Greene’s power numbers give him a slight edge. Greene leads the Raiders in extra-base hits (16) and runs scored (25). His .586 slugging percentage is tops in the Horizon League. Fowler has registered a .345 batting average and swiped ten bases. He has also been plunked a HL-most 12 times. Garrett Gray and Michael Timm share the team RBI lead with 23 apiece.

Head coach Rob Cooper is in his ninth season at Wright State. He was named manager of the 2013 18U National Team this past January. The University of Miami alum is 280-218 (.561) in his 9+ seasons as skipper of the Raiders. Wright State has finished above .500 in conference play each of Cooper’s nine seasons. Furthermore, the Raiders have made three NCAA appearances while on his watch. Cooper also owns two Horizon League regular season titles.

Et Cetera: The Crusaders neither scored nor allowed double digit runs in their first 34 team games. They then scored 15, and allowed 16 and 15 in three straight games from April 17th-20th...Five Raiders have hit at least two home runs this season. Only one Crusader has multiple home runs thus far...Billy Cribbs has a .421 (16-for-38) average at the plate with runners in scoring position while Bryce Hara and Spencer Mahoney have combined to hit .138 (9-for-65) with runners in scoring position...John Loeffler has started 91 games as a Crusader. He has reached base in 84 of those starts...Andrew Bain is batting .385 versus lefties, but .219 against righties...Valpo’s team batting average with two outs is .231...Joey Hoelzel has not allowed a home run in 45 innings pitched...Chris Manning has reached base 20 times when leading off an inning.