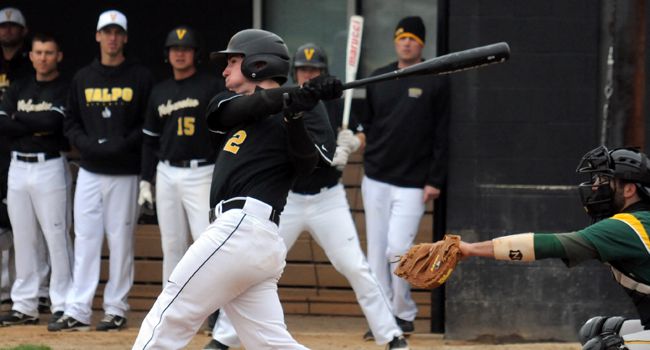 Despite surrendering a single tally in the first inning, Valparaiso’s strong offensive outing and solid defensive effort propelled the Crusaders to a 5-1 victory over the visiting Wright State University Raiders.

After allowing an unearned run to cross the plate in the first, Valpo responded with a pair of back-to-back doubles by Tanner Vavra and John Loeffler to even the score.

However, it was Chris Manning who pushed Valpo over the edge, homering over the left-center fence to give Valpo the lead 3-1.

Loeffler drove in Bryce Hara in the third inning with a single to right field after Hara led off the frame with a double to right-center field.

Manning hit his career-high second home run of the game with a lead-off blast in the bottom of the 6th to put the score out of reach for the Raiders.

"We're continuing to swing the bat and get big hits. We need to keep that going," head coach Tracy Woodson said.

Vavra’s inspired performance at second base robbed the Raiders of two possible hits as he notched seven put outs and four assists, including a couple of diving catches on the right side of the field.

Chris DeBoo’s strong pitching performance held Wright State to six hits - only one for extra bases - as he threw 90 pitches in 7 innings to improve to three wins on the season.

"I was ecstatic with the way Chris bounced back after the first inning. He showed a lot of character after his outing last weekend," Woodson said.

Ben Mahar stepped in and tossed two solid innings, striking out a batter and giving up only two hits in his brief appearance on the mound.

Just as it appeared that Wright State showed signs of a pulse in the top of the 9th, Billy Cribbs threw out Beau Phillips for the final out of the game.  Phillips was trying to advance to second base on the throw to the infield after his two-out single to left field.

The win improves Valpo's overall record to 16-23, and 5-8 in the Horizon League.

The Crusaders continue their series with Wright State on Saturday beginning at 1:00 PM CST at Emory G. Bauer Field. Freshman Dalton Lundeen (2-0, 3.78) gets the start for Valpo opposite right-hander Joey Hoelzel (3-2, 3.80).