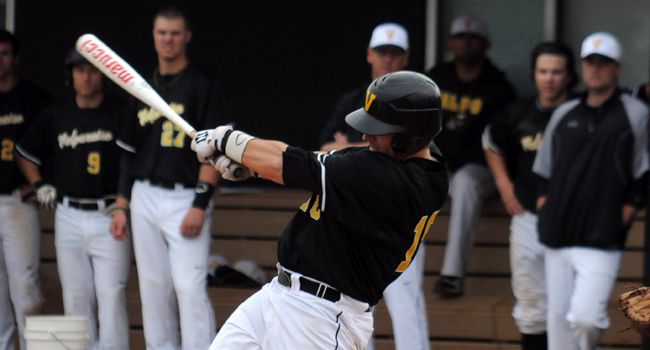 Five Crusaders registered multi-hit games as the Brown and Gold scored in six of eight innings.

Just as they did yesterday, the Raiders put a run on the scoreboard in their half of the first inning. Catcher Garrett Gray doubled down the left field line which scored Kieston Greene from second base.

Valpo scored early and often as it guaranteed at least a series win.

John Loeffler recorded two of his five runs batted in with an opposite-field base hit.  Andrew Bain and Bryce Hara had both singled ahead of Loeffler before crossing the plate for a 2-1 lead after one inning.

Wright State starter Joey Hoelzel allowed two walks and a single to load the bases in the second inning before recording his first out of the frame on a fielder's choice.

Cooper summoned Cody Kopilchack into the game in an effort to get the third out of the second inning. The lefty was egregiously erratic in his abbreviated appearance on the hill, throwing two wild pitches, walking a batter and hitting two. Kopilchack did not retire a batter.

Cooper made the long walk back to the mound to try his chances with righty Trevor Swaney.

Designated hitter Andrew Bynum welcomed Swaney to the game with a two-run single through the left side to put the cherry on top of a six-run Valpo 2nd inning.

Valpo followed with two runs in the 4th, three in the 6th, and two in the 7th off a combustible Wright State bullpen en route to its most potent offensive display this season.

Hara raised his average to .265 on the season with a 3-for-4 day along with four runs scored and two RBI.

Lundeen went seven innings for his third win of the season. The freshman allowed nine hits, five runs, one walk, and struck out six.

"Dalton was very effective today. He threw strikes and went right after hitters.  I'm sure it's nice to pitch with a big lead. They gave us some bases but we had a lot of big hits," head coach Tracy Woodson said after the game.

Kyle Wormington (1-7, 5.70) will make his 11th start of the season. The Raiders have yet to declare a starting pitcher.