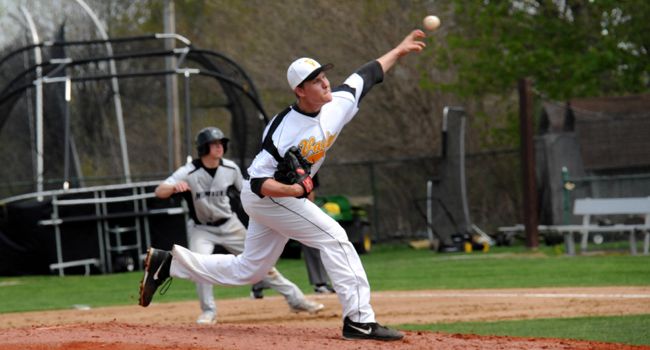 Dalton Lundeen made the start Saturday for the Crusaders in their 10-7 victory over Milwaukee. (Ray Acevedo)
Milwaukee at Valparaiso | May 04, 2013
Related Links
Related Links

The objects in first-place Milwaukee's mirror are certainly closer than they appear.

The Panthers (21-18, 11-6 Horizon) struck first, as they assembled a four-run second inning, capped off with a Luke Meeteer bases-clearing double to left.

Cale Tassi kept the Valpo offense in check for the first four innings. Last year's Horizon League Pitcher of the Year runner-up effectively mixed in a breaking ball and changeup to keep the Crusaders off-balance the first time through the order.

After some minor adjustments, Valpo pushed a run across in its half of the 5th inning. Spencer Mahoney kickstarted the inning with a triple to the right-center gap. After the next two batters were unable to score the shortstop, Andrew Bain recorded his 21st RBI of the season on an infield single.

The Panthers responded with two runs in their half of the 6th, chasing Valpo starter Dalton Lundeen in the process.

Down 6-1, the offense continued to go to work on Tassi.

John Loeffler and Chris Manning drew walks to lead off the home half of the 6th. After the Manning walk, head coach Scott Doffek called on Justin Jaquish to get Milwaukee out of the inning.

A single and a sacrifice fly later, Valpo cut the deficit to 6-3.

Loeffler provided a spark for the Crusaders in the 7th inning with a two-run double to right center. The extra-base hit plated Tanner Vavra and Bryce Hara to make it a 6-5 ball game.

The Valpo bullpen held up its end of the bargain, throwing up zeroes in the seventh and eighth innings.

Mahoney led off the 8th inning with a single off the glove of a diving Pat Wilson at first base.

Doffek then brought shortstop Alex Erdmann in to pitch in place of Jaquish.

Down one run, Billy Cribbs laid down a perfect sacrifice bunt to advance Mahoney into scoring position with one out.

Kyle Schneider brought the Crusader faithful to their feet with a pinch-hit game-tying double down the left field line.

Bain followed with a single to left that bumped up Schneider, the go-ahead run, to third base. With runners on the corners and one out, Doffek opted to intentionally walk Hara to create a force play at any base. The decision meant the Panthers would take their chances with Vavra and the bases loaded.

The curious move paid off as Erdmann retired Vavra on strikes for the second out.

With the bases still loaded, Erdmann hit Loeffler on the leg with a 2-2 slider to force in the go-ahead run.

The wheels completely fell off as another hit-by-pitch followed before two consecutive bases-loaded walks made it a 10-6 game.

Despite it not being a save situation, closer Karch Kowalczyk was given the task of getting the final three outs.

Milwaukee didn't go quietly in the 9th. In fact, the Panthers brought the potential go-ahead run to the plate.

After a Wilson infield blooper fell for a hit with the bases loaded, Jonathan Capasso was called on to pinch-hit in a 10-7 ball game.

With his perfect ERA already a casualty, Kowalczyk struck out Capasso on three straight offspeed pitches to give the Crusaders their eighth consecutive win.

Ryan Kennedy (2-1) got the win after throwing a scoreless top of the 8th.

"I really liked the way we played hard down to the end.  We took advantage of their mistakes. We're starting to play like we did last year at this time," head coach Tracy Woodson said.