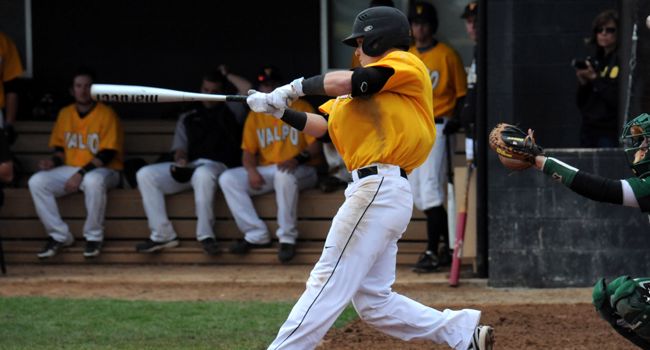 Often overlooked, a bullpen can either provide a team with a healthy level of confidence or plenty of heartache.

Valpo again had to play from behind as Luke Meeteer put the Panthers on top 2-0 in the third inning with a two-run double.

The Crusaders responded right back with two of their own in the home half of the third. After starting pitcher Mike Schneider hit Andy Burns and walked Andrew Bain to lead off the frame, Bryce Hara advanced the two runners into scoring position with a high-chopping ground out.

Tanner Vavra then pushed a bunt between the pitcher's mound and first base that scored Burns. The infield single also allowed Bain to move up to third.

John Loeffler followed with an RBI groundout to third base to even up the game at two apiece.

Valpo momentarily took its first lead in the bottom of the fifth after Loeffler's second run-scoring ground out of the day.

Milwaukee answered in the top of the sixth when catcher Mitch Ghelfi scored Michael Porcaro on a base hit to shallow right field.

The Panthers appeared to be headed to their 12th Horizon League win after scratching across two runs in the seventh and a run in the eighth.

Reliever Brian Keller went out for his fourth inning of work in the bottom of the 8th when the first four Crusaders of the inning reached against him.

Kyle Schneider kicked off the home half of the eighth with a double to left center. Karch Kowalczyk muscled a single to center two batters later to score Schneider and cut the Panther lead to 6-4.

The Valpo backstop greeted Uhen to the contest with a double to left field that tied it 6-6.

Hara provided the game-winner with an opposite-field single on a 1-0 fastball that plated Cribbs.

With Kowalczyk having thrown two straight days, Zack Walsh was called on to start the 9th inning. After two flyouts, Sam Koenig singled up the middle.

With the tying run on base, head coach Tracy Woodson called on Kowalczyk to get the final out.

After allowing a double, the Crusaders closer induced a game-ending fly out to left field off the bat of Derek Peake.

The one-run victory moves Valpo to one game out of first place in the Horizon League.

Starting pitcher Cole Webb allowed three earned runs in 6 1/3 innings. The junior allowed seven hits, walked one, and struck out three in his first start back from injury.

Sean Kennedy (1-0) earned the win by virtue of recording the final out of the top of the eighth.

Tuesday's game was originally scheduled as a road game for Valpo, but was moved to Emory G. Bauer Field. First pitch is at 3:00 pm.