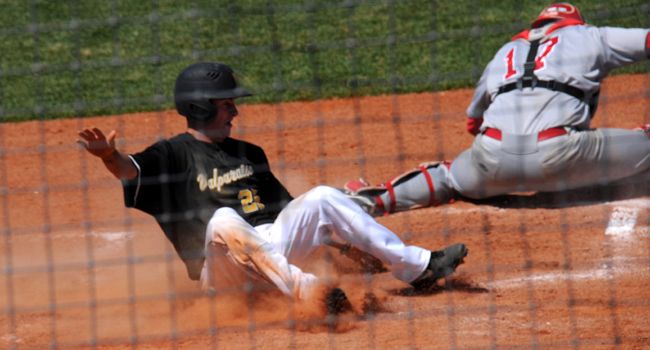 Andrew Bain touches home plate for what turned out to be the game-winning run in the 6th inning Thursday. The left fielder had a 2-for-4 game in a 4-1 win over Youngstown State. (Ray Acevedo)
Youngstown State at Valparaiso | May 16, 2013
Related Links
Related Links

Cole Webb was due for some good fortune.

The first half of 2013 yielded several tough-luck losses where either the offense - or the defense - betrayed him. The junior dodged bullets all afternoon Thursday in a 4-1 win over Youngstown State.

Command issues plagued the righty as he frequently worked from behind in the count only to see elevated pitches land in the outfield for hits.

"Cole really struggled through six innings, but we were very fortunate to take advantage of their mistakes. We've got to play better the next two days," head coach Tracy Woodson said.

To his credit, Webb labored through and turned in six innings of one-run ball in a 119-pitch start.

Phil Lipari got the Penguins on the board in the top of the first with a double to left center that scored Mike Accardi. A successful relay throw from Spencer Mahoney to Billy Cribbs nixed Drew Dosch at home plate for the third out of the inning.

Webb and the Crusaders avoided further damage in the second inning after Neil Schroth tried to stretch a leadoff double into a triple. The throw from Mahoney arrived at third base in plenty of time to retire the Penguins' second baseman for the first out.

The Penguins recorded four hits in the third inning but a caught stealing and a pickoff at second base negated any offensive momentum.

Youngstown State starter Patrick O'Brien was excellent early on as he kept the Crusaders hitless through three frames.

It was in the bottom of the fourth inning that Valpo evened up the score at one apiece.

With Tanner Vavra on second base, Chris Manning hit a chopper over the mound that Schroth backhanded and threw to first in an attempt to retire the Crusaders' right fielder. Manning legged out the throw at first. Vavra never stopped around third base and he raced around to score before Kevin Hix's throw from first base eluded catcher Josh White.

Valpo took the lead in the sixth inning with an RBI base hit from John Loeffler. Loeffler began the at-bat with Andrew Bain at first, but Bain stole second to advance into scoring position before the Crusaders' first baseman drove in his 38th run of the year with a single to right field.

Valpo added two insurance runs in its half of the seventh. With two outs, Cribbs deposited a single into left center before Andy Burns corked a double off the right field wall to set up runners on second and third for Bain.

O'Brien balked in the third Crusader run immediately following a mound visit. With Burns on third base, Bain skied a fly ball into right field that outfielder Nick DiNello lost in the sun. Burns scored on the play while Bain cruised in to second base.

Ben Mahar relieved Webb in the seventh inning and spun off two perfect innings serving as the bridge to closer Karch Kowalczyk.

Kowalczyk retired the first two Penguins in the ninth with ease before issuing a walk to DiNello.

Dosch lined a pitch into left field that Mark Johnson made a sliding catch on for the final out of the game.

The save was Kowalczyk's eighth of the season. The junior now holds the Horizon League lead in saves.

"Our bullpen was outstanding today. Both (Ben) Mahar and Karch (Kowalczyk) were great," Woodson said.

With the win, Valpo improved to 26-26 overall, and 11-11 in the Horizon League. The Crusaders guaranteed no worse than a fourth-place finish with the victory.