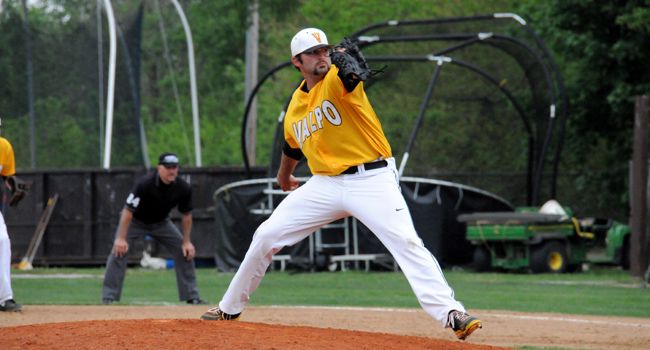 Behind a number of escape acts by the pitching staff, Valpo held on to beat Youngstown State 3-2 Saturday to wrap up the regular season.

On a day where Valpo honored nine seniors, Kyle Wormington earned a six-out save - his first as a Crusader - and Tanner Vavra squeezed home the game-winning run.

"We're excited to finish second. I thought the seniors did a nice job for us today," head coach Tracy Woodson said.

As they did in each game of the series, the Penguins scored first.

With Mike Accardi on second base, Marcus Heath hit a grounder to short that snuck between the legs of Kyle Schneider.  The error allowed Accardi to come around and give Youngstown State a 1-0 lead after one inning.

Chris Manning tied the game in the second inning with a solo blast to left field off Penguins' starter Jared Wight. The round-tripper was Manning's third of the season.

The Crusaders pushed across two runs in their half of the 5th inning. With runners on the corners, Bryce Hara poked a Josh North delivery to third base. Jack Graham's throw to second base for the front half of the double play ended up in right field and Billy Cribbs touched home for a 2-1 Valpo lead.

Later on in the inning, Vavra executed a perfect squeeze bunt towards second base that scored pinch-runner Andy Burns.

The win appeared in serious jeopardy in the Penguins' half of the 9th. Heath ripped an RBI single to draw them within one run.

The Penguins had the bases loaded with one out and the tying run 90 feet from home plate. But Wormington got Kris Moules to roll over on the first pitch of the at-bat for a 6-4-3 game-ending double play.

Valpo starter Dalton Lundeen (4-1) turned in five innings on the hill and the two-run Valpo fifth made him the winning pitcher.

A triumvirate of seniors preserved the win for Lundeen as Connor Buxton, Mike Jacobs, and Wormington shared the final four innings.

With UIC (26-26, 13-11 Horizon) defeating Wright State Saturday, the Flames clinched the #2 seed in the Horizon League Conference Tournament next week in Niles, Ohio.