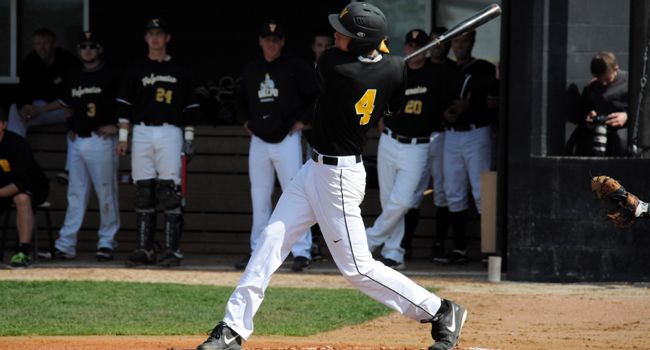 Spencer Mahoney went 1-for-4 with a walk and two runs scored in Valpo's 6-4 win over Milwaukee Saturday in the Horizon League Conference Tournament. (Ray Acevedo)
Valparaiso at Milwaukee | May 25, 2013
Related Links
Related Links

Valpo took advantage of some first inning Milwaukee jitters as a five-run first inning catapulted the Crusaders back into the Horizon League Championship Game.

Andrew Bain, the game's first batter, led things off with a single to left field. Bryce Hara flew out to right field for the first out. The next five batters reached as the Crusaders were beneficiaries of a wild pitch, two errors and a mental lapse.

Tanner Vavra hit an infield single coupled with a throwing error that allowed Bain to move to third base. With runners on the corners, Tassi threw an egregiously wild pitch that sent catcher Mitch Ghelfi to the backstop. Bain beat the toss from the catcher to Tassi at the plate for the Crusaders' second run. Vavra caught Tassi napping as he raced around to third base on the play while the pitcher had his head down.

John Loeffler took a 3-2 curve ball in the backside to create another runners-on-the-corners situation. The Crusaders put the safety squeeze on with Chris Manning at the plate. The right fielder bunted the delivery towards the first base side of the pitcher's mound. Tassi casually shoveled the ball towards home as Vavra slid around Ghelfi's leg.

Spencer Mahoney worked his 29th walk of the season to load the bases with one out. Elliott Martin hit a made-to-order double play ball to third base but Koenig airmailed the throw home for his second error of the inning. Loeffler scored on the miscue to extend the Valpo lead to 3-0.

Tassi got ahead 1-2 on Billy Cribbs before the Valpo catcher sent a pop up towards foul territory. Milwaukee second baseman Michael Porcaro made a running catch towards the seats which allowed Manning to come home and make it 4-0.

Mark Johnson drew a walk before Bain smacked his second single of the inning to left field.

Tassi recorded two outs and threw 39 pitches in the calamitous top of the first inning before head coach Scott Doffek pulled him in favor of left-hander Tyler Thicke.

Thicke got the Panthers out of the bases-loaded jam with one pitch as he coaxed a tapper back to the mound off the bat of Hara for the third out of the 21-minute frame.

With a five-run cushion, Valpo starter Chris DeBoo attacked the Panther lineup, effectively working both sides of the plate while sprinkling in sharp breaking balls. The senior scattered seven hits and one run in seven innings on the hill. DeBoo's only hiccup came in the sixth when Ghelfi doubled down the line to plate Porcaro.

The Panthers made things interesting in the eighth inning as they pushed two runs across against Ben Mahar before bringing the tying run to the plate.

Head coach Tracy Woodson called on Karch Kowalczyk for the four-out save. Kowalczyk induced an infield pop-up from Derek Peake, the first man he faced, but Mahoney lost the ball in the sun and it fell for a hit. Koenig scored from second on the play to make it a 6-4 game.

Kowalczyk worked around an error and a walk in the ninth inning for his 11th save of the season.

Valpo (30-26) advances to the Championship Game of the Horizon League Tournament Sunday morning at 11:00am ET/10:00am CT at Eastwood Field. The Crusaders will face the winner of Milwaukee and Wright State. Either team will have to beat Valpo twice for the Horizon League crown and a bid to the NCAA Tournament.