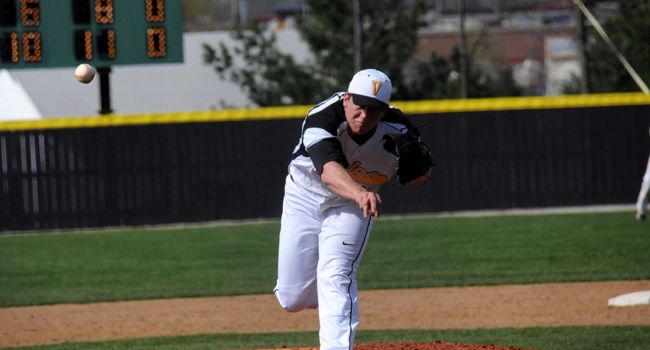 This Week in Crusader Baseball: Last year Valparaiso ended a 44-year NCAA Tournament drought by winning the Horizon League Conference Tournament and earning a trip to the Gary Regional. This season the Crusaders will again stay in Indiana for their NCAA Regional as they head to Bloomington to face the 13th-ranked Hoosiers in their opening game. Valpo defeated UIC, regular-season champion Milwaukee, and then Wright State in the Championship Game for its second consecutive Horizon League Tournament crown.

On the Air: Jim Barbar and Rusty Ensor will have the call on ESPN3 as they will carry all games in the Bloomington Regional. Live stats will be available through valpoathletics.com for all games as well.

Head Coach Tracy Woodson: Tracy Woodson, the 16th head coach in Valparaiso University history, is in his seventh season at the helm of the Crusaders and has a 186-208 (.472) record both for his career as well as at Valpo. Woodson ranks third in school history for career wins by a head coach. A member of the Los Angeles Dodgers 1988 World Champion team, he has also managed in the minor leagues through the AAA level.

Series Notes: The Crusaders and Hoosiers have played 45 times in the history of the two schools. IU leads the all-time series 33-12. Valpo and Indiana last met on April 13th, 2010 at the U.S. Steel Yard. The Hoosiers won the tilt 11-2. Valpo and Florida have never met. The Crusaders and Governors last dueled in 2011 when Austin Peay took all three games of the season-opening series. The Governors have a 17-5 advantage in the all-time series that dates back to 1982.

Scouting the Hoosiers: Indiana currently stands at 43-14 overall. The Hoosiers possess a top-30 offense and a pitching staff that touts the 7th-best earned run average in the country (2.57). Eight IU regulars carry batting averages of at least .300. Infielder Dustin DeMuth finished the season a tick under .400. Catcher/outfielder Kyle Schwarber’s 16 home runs are 7th-most in Division I.

Outfielder Justin Cureton has stolen 21 bases on 28 attempts. Valpo catcher Billy Cribbs has thrown out 43.6% of potential base stealers in 2013. Sophomore Sam Travis leads IU with 29 extra-base hits. He has also walked (33) more than he has struck out (29). Overall, Indiana has a +193 run differential.

On the mound, the Hoosiers have one of the best staffs Valpo has seen since Arkansas in 2012. Indiana’s weekend starters are a combined 25-5. The team’s 1.22 WHIP is 26th in the country.

Valpo will see 6-foot 10-inch right-hander Aaron Slegers Friday night. The innings-leader of the Indiana staff possesses a fastball in the upper 80’s complemented with an average slider and change up. Slegers has walked just twelve batters in 88 2/3 innings.

With ten saves, Ryan Halstead is the IU closer. He has the strongest arm on the Hoosier staff with a fastball that sits in the low 90’s. Scott Effross and Luke Harrison add quality depth to the pen as the two have combined to walk just 17 batters in 92 1/3 innings. Teams are hitting just .247 versus Indiana pitching.

Scouting the Governors: Winners of fifteen straight, Austin Peay may be one of the best under-the-radar teams in the Tournament. The Governors’ .315 team batting average is the best of the four teams in the Regional. Craig Massoni is hitting .388 with 16 home runs and a 1.162 OPS. His 68 runs batted in are the most of any player in Bloomington this weekend as well. Cody Hudson has stolen 30 bases while Jordan Hankins’ 66 runs scored leads a powerhouse Austin Peay offense.

The Governors went 22-8 in the Ohio Valley Conference this season. Their weekend rotation compiled a 24-5 record overall. Casey Delgado is one of only 31 pitchers in college baseball to tally 100 strikeouts this season. Senior Kyle Rogers has converted 21 saves in 2013 - the most of any closer in the country. The Governors enter the Bloomington Regional with the highest earned run average of the four teams (4.26) but also the most K’s (443).

Scouting the Gators: Pay little attention to Florida’s 29-28 record. The Gators not only compete in the best conference in college baseball, but only one team in the country played a tougher schedule in 2013. Florida didn’t lose a game in the 2012 NCAA Tournament until they arrived to Omaha where the Gators went two and out. Florida has made the College World Series each of the past three seasons. Kevin O’Sullivan is in his sixth season at the helm in Gainesville.

Jonathon Crawford will make the start Friday for Florida. He’s been a constant in the rotation for the Gators as he’s made six more starts than the next pitcher. Ten different hurlers have made a start for the Gators in 2013.

Taylor Gushue and Casey Turgeon pace the Gators with five home runs apiece. Richie Martin (.304) and Harrison Bader (.304) are the only two regulars for Florida with batting averages over .300. Bader has swiped 14 bases on the season.

Arms Race: Strong pitching has yet again helped the Crusaders reach the NCAA Tournament. A 3.67 team earned run average ranks 69th in the country. Valpo has four pitchers with five wins (Webb, DeBoo, Wormington, Lundeen) and the Horizon League Relief Pitcher of the Year (Kowalczyk) that has allowed just one run all year.

At the Dish: Valpo has enjoyed another strong season at the plate, batting .277 as a team and reaching base at a .363 clip. The Crusaders also average a stolen base per game. They are not a team dependent upon the long ball; but rather, a club that utilizes the sac bunt, stolen base, and hit-and-run as much as any.

In and Out: The Crusaders have had 18 games finish in 2 hours, 15 minutes or less. They’ve had six games in under two hours total. Only three games eclipsed three hours.

Attacking Hitters: An aggressive approached instilled by pitching coach Brian Schmack finds the Crusader staff in the top 10 nationally in walks allowed per nine innings pitched. Their 2.40 mark is seventh in the country after last year’s staff was sixth at 2.31 BB/9 IP.

Not Afraid: After defeating eventual College World Series participant Arkansas last season, the Crusaders knocked off another top-10 team in Arizona State on April 21st. The 8-6 victory was Valpo’s first ever over a Pac-12 team.

30 for 30: With their win over Milwaukee in the semifinals of the Horizon League Conference Tournament, the Crusaders clinched their second consecutive 30-win season.