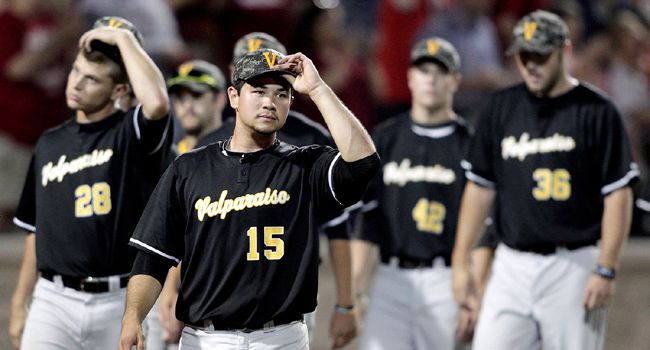 Valpo silenced the hometown crowd for eight innings, but a four-run ninth sent the Hoosier fans into a frenzy as #13 Indiana defeated the Crusaders 5-4 Friday night in Bloomington.

"I'm disappointed for the guys. We had the game in hand. I thought we controlled it for eight innings," head coach Tracy Woodson said.

The Crusaders wasted no time making their presence known in front of a capacity crowd at Bart Kaufman Field.

Andrew Bain led off the game with a single to right field before Tanner Vavra and John Loeffler recorded back-to-back singles. With the bases loaded, Chris Manning bounced an Aaron Slegers delivery to second base that brought home Bain from third. The fielder's choice gave Manning his 33rd run batted in of the season.

Valparaiso kept the pressure on in the second inning. Elliott Martin reached on an error by IU shortstop Michael Basil to start the frame. Catcher Billy Cribbs replaced him on the basepaths after a fielder's choice erased Martin. Mark Johnson followed with a four-pitch walk and then Bain gave Valpo a 2-0 lead with a single up the middle on a 0-1 pitch.

Armed with an early lead, Webb dissected the Big Ten Champion offense utilizing a lively cutter, change up, and a running fast ball to limit Indiana to one run on five hits in seven innings.

The Hoosiers stayed off the scoreboard until Webb's final inning of work - the 7th - when Chad Clark singled in Casey Smith. Smith had reached on a double that represented Indiana's only extra-base hit of the game until the 9th inning.

Webb passed the torch on to Ben Mahar who worked a perfect bottom of the eighth. The reliever sat down the top of the Indiana order including All-American catcher Kyle Schwarber.

Valpo finally got to the Indiana bullpen in the ninth inning as Hara and Bain came in to score on an error by Clark at second base. The bases were loaded with two outs when Loeffler reached on the miscue.

With a 4-1 lead, Woodson went to closer Karch Kowalczyk. Kowalczyk entered the tilt 12-for-12 in save opportunities. The junior retired leadoff man Scott Donley before Basil reached on an infield single. Dustin DeMuth and Casey Smith ripped consecutive doubles to bring the Hoosiers within a run.

With the tying run on second base and the winning run at the plate, Kowalczyk got ahead 0-1 on Clark before the Valpo closer hung a breaking ball that Clark sent over the left field wall.

Clark's second home run of the year capped the 5-4 Indiana comeback. The Crusaders came into Friday's game 29-0 when leading after eight innings.

Bain finished the game 3-for-4 with two runs scored, an RBI, and a walk.

"We just have to have a short memory. Whether it's an at-bat or a loss like tonight, we've just got to cut it out and be ready to go tomorrow," Bain said after the game.