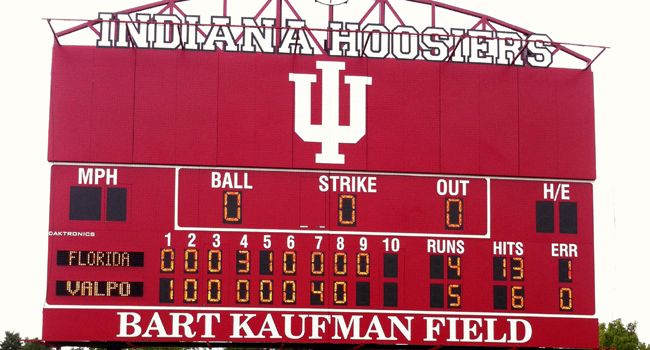 Less than 24 hours after suffering one of the more disappointing losses in program history, Valpo showed remarkable resolve by rebounding from a late three-run deficit to defeat the Florida Gators 5-4 at Bart Kaufman Field in Bloomington, Indiana.

The victory kept their season alive as the Brown and Gold advance to play the loser of #13 Indiana/Austin Peay Sunday at 1:00pm ET/12:00 pm CT.

"I just want to say how proud I am of the guys. The players are the ones that have to go out and do the job, and I think we've got good ones," head coach Tracy Woodson said.

Spencer Mahoney gave the Crusaders their second first-inning lead in as many days. Last year's Honorable Mention All-American sent a Johnny Magliozzi fastball over the left-center field wall to jump out on top 1-0.

Chris DeBoo kept the Gators off the scoreboard until their half of the fourth inning. Florida rattled off five hits in the three-run frame. Cody Dent put Florida ahead 3-1 with a two-run double down the right field line. Dent had entered the at-bat with just one hit in his previous 22 plate appearances.

The Gators manufactured an insurance run in the top of the fifth. Harrison Bader reached on a two-out single before stealing his 15th base of the season to advance into scoring position for Josh Tobias. Bader touched home on a Tobias RBI single to left to make it 4-1.

Just when it seemed that Magliozzi was settling in, Billy Cribbs led off the bottom of the seventh with a single to center that ended a string of seven straight Crusaders retired. Valpo kept things in motion as Bryce Hara drew a five-pitch walk before Andrew Bain loaded the bases with a floater to left center that fell in for a hit. Bain's single ended Magliozzi's day.

With two of the next three batters left-handed, Florida skipper Kevin O'Sullivan called on southpaw Daniel Gibson out of the bullpen.

Gibson struggled to find the plate as he fell behind in the count to Mahoney with the bases loaded. The reliever worked back to a full count before Mahoney hit a short hop to third base. Tobias made a clean scoop, but then bobbled the ball when attempting to make a throw. All runners moved up a base as the error cut the Gator lead to 4-2.

Gibson's command issues continued in the inning as back-to-back bases-loaded walks to Tanner Vavra and John Loeffler tied the game at four.

With the bases loaded and still no outs, O'Sullivan brought in right hander Ryan Harris to limit the damage.

Chris Manning greeted Harris with a hard hit ground ball up the middle on the first pitch he saw. Florida second baseman Casey Turgeon made a nice running stop to his right to get the force out at second, but Valpo took a 5-4 lead on the fielder's choice.

Tensions ran high in the Gator half of the ninth as the first two batters reached via a walk and a base hit respectively. Vickash Ramjit laid down a sacrifice bunt to advance Turgeon and Justin Shafer into scoring position with one out.

Kyle Wormington, who came on in relief in the top of the seventh, got Taylor Gushue swinging at an assortment of changeups for the second out. Harrison Bader was the last hope for the Gators but after a lengthy at-bat, the outfielder grounded out to third for the final out of the game.

Wormington threw three shutout innings as he improved to 6-7 on the season.

"It's exciting. It's exhilarating to get that win. As a team, we are just looking forward to tomorrow. We came to win and that's what we want to do," Wormington said after the game.

The win represented Valpo's second over a Southeastern Conference team in the last two seasons. It was also the first for the Crusaders in an NCAA Regional game since they defeated Southern Illinois 4-3 in the Columbus Regional in 1966.