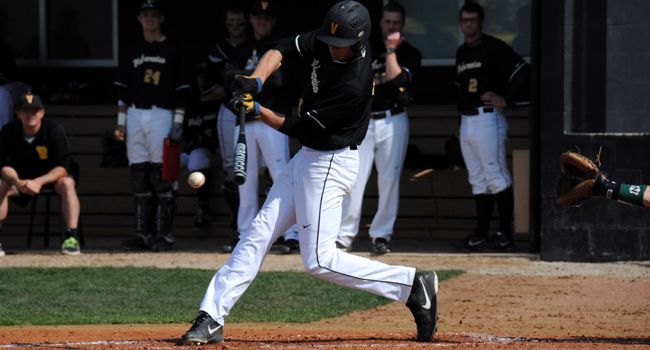 A season that included a second consecutive Horizon League Championship and the first NCAA Regional win since 1966 ended Sunday in Bloomington, Indiana as the Austin Peay Governors defeated Valpo 5-4.

"I'm ecstatic about our season, how we performed here. All three were one-run games so I'm very proud of what our guys did and I'm excited for what we have to continue on starting next year again," head coach Tracy Woodson said.

For the third straight day, the Crusaders scored in their half of the first inning. Shortstop Spencer Mahoney laced a rope up the middle for Valpo's first hit of the afternoon. He came all the way around from first to score when Tanner Vavra lined a triple over the head of Austin Peay right fielder Tommy Hager.

John Loeffler worked a full count before he added to the Valpo lead with a single to right. Vavra touched home on Loeffler's 40th RBI of the season.

The Governors plated an unearned run in the top of the third on a Jordan Hankins sacrifice fly to center. After reaching on an infield single, Brett Carlson advanced to third on a missed catch at first base by Loeffler. The sacrifice fly cut the Valpo lead in half.

Austin Peay tied the game at 2-2 in the fourth inning. Hager stepped to the plate and sliced a two-out single to left field that scored Cody Hudson.

After three scoreless frames, Valpo regained its two-run lead in the bottom of the fifth. Andrew Bain and Mahoney hit back-to-back singles to kick off the inning. The pair advanced to second and third on a balk called on Ryan Quick. Vavra and Loeffler drove both in via sacrifice flies to right and center field respectively.

The 4-2 advantage didn't last long as Hudson hit a leadoff double to left-center then advanced to third as the carom of the wall was bobbled. A Michael Davis sacrifice fly to center brought Austin Peay back to within one run.

A seesaw game teetered back towards even when Reed Harper singled home all-American Craig Massoni in the Austin Peay seventh.

Valpo was unable to cash in on a golden opportunity in its half of the seventh.

After two singles and a walk, the Crusaders had the bases loaded with one out for Chris Manning. Facing reliever Lee Ridenhour, Manning hit a fly ball to left too shallow for Mahoney to tag from third. After a lengthy two-out at bat, Andy Burns was retired on strikes as Valpo stranded three.

Ben Mahar was called on to get the last out of the seventh in place of starter Dalton Lundeen. Lundeen threw 6 2/3 innings, allowed four runs (two earned) on six hits while walking four and striking out one.

In a 4-4 deadlock, Mahar surrendered a leadoff home run to designated hitter Michael Davis in the eighth. The long ball to left ended up being the difference as Valparaiso was unable to push a run across against Tyler Rogers, the NCAA leader in saves.

Rogers worked scoreless eighth and ninth innings for his 23rd save of the season.

The defeat represented the end of nine seniors' careers, all of whom were key parts of a rebuilding process that put Valpo in a position of strength within the Horizon League.