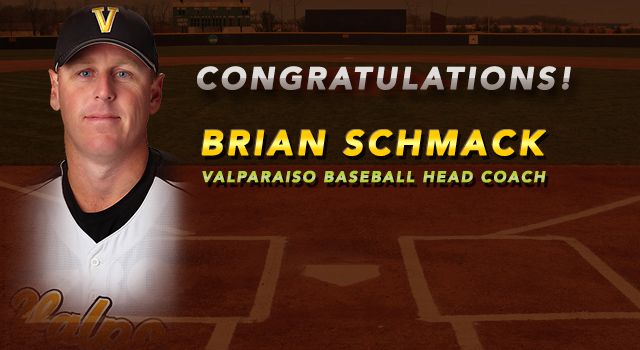 Valparaiso University director of athletics Mark LaBarbera announced today that Brian Schmack has been named the 17th head coach in Crusader baseball history and just the sixth since 1946.

"We are very excited to have Brian Schmack leading our baseball program," said LaBarbera. "Over the past couple of years, we have added another chapter of championship play to Valpo's baseball tradition. This has been the result of hard work by many people, including Brian. Coach Schmack's baseball knowledge, ability to recruit, to teach, and to develop young men both on and off the field make him the right person to be our head coach."

Schmack has spent the last seven seasons as Valpo's pitching coach, helping the Crusaders to back-to-back Horizon League championships in each of the last two years. Prior to the 2011 season, Schmack was promoted to associate head coach. He also brings 10 seasons of professional playing experience to the position.

"I'd like to thank Mark LaBarbera and (vice president) Michael Joseph for giving me the opportunity here at Valparaiso," said Schmack. "I'm honored to be able to lead these guys and this program - it feels awesome and it's been a goal of mine for a long time. Our goal as a program is going to be to always win the Horizon League. Having success in regionals also is going to be a goal. Having played in the Horizon League championship game three years ago, then getting to a regional and then getting a win in a regional, we'd like to keep taking steps forward."

Over his seven seasons with the Crusaders as pitching coach/associate head coach, Schmack helped the Valpo baseball program to 187 victories, including the Horizon League regular season title in 2012 and the Horizon League tournament championship in 2012 and 2013. The Crusaders advanced to the NCAA Division I Tournament each of the last two years after a 44-year draught, and defeated Florida in the 2013 NCAA Tournament, the program's first tournament win since 1966.

Schmack shaped the Valpo pitching staff into one of the best in the Horizon League, molding a staff with an ERA of 5.73 in the year before his arrival into one which has led the league in ERA each of the last three seasons, posting marks below 4.00 all three years. The Crusaders' pitchers have also ranked among the top-10 nationally in fewest walks per seven innings each of the last two seasons.

Schmack has coached three of the eight winningest pitchers in program history, as well as two of the top five in Crusader history in career strikeouts and two of the top four in saves. Under his tutelage, Tyler Deetjen won eight games in 2012, the most by a Valpo pitcher in 25 years. Bryce Shafer tallied 121 strikeouts in 2010, second-most in program history and most by a Crusader in the last 40 years, while Jarad Miller set new Valpo and Horizon League records with 17 saves in 2009. In addition, six pitchers coached by Schmack have gone on to play professional baseball, including a pair - Shafer and Dallas Cawiezell - who were chosen in the MLB Draft.

Schmack pitched in professional baseball from 1995-2004 in the Chicago White Sox, Texas Rangers, and Detroit Tigers organizations after breaking in with the Newark Bison of the Frontier League. In 2003, Schmack earned a promotion to the major leagues with the Tigers, appearing in 11 games and posting a 1-0 record with a 3.46 ERA. He earned his first major league victory against Cleveland on September 2, 2003.

Schmack pitched collegiately at Northern Illinois University from 1992-1995. He earned his bachelor’s degree in sports management from Valparaiso University in 2009. He and his wife, Cari, have three children, Kyle born in 2001, and twins Ella and Riley born in 2004.

What they're saying about Brian Schmack

"Having Brian on my staff for the last seven years, I've seen one of the better pitching coaches that I've ever been around. I think his move to being the head coach will be an easy transition. His knowledge of the game and his passion for the game will do him well as a head coach." - Tracy Woodson, former Valparaiso head coach and current Richmond head coach

"I think Brian is an outstanding hire for Valparaiso University baseball. First off, Brian is a quality individual, a quality family man. Couple that with his baseball knowledge, and I think Valparaiso baseball will be in great hands. He's been there seven years, and in that time no doubt has been a huge factor in the rise in the program. The continuity the program will have with Brian being named head coach is going to be good for everybody." - Ed Mathey, Northern Illinois head coach

"Brian played for me at Northern Illinois - he always overachieved as a player and picked right up on it as a coach. Pitching's a big part of the game, and Brian has done an great job coaching some outstanding pitching staffs in his time at Valparaiso. He's also just a tremendous guy - a good person who truly cares about his players and does things the right way. Valpo did well to hire Brian as its new head coach." - Spanky McFarland, former Northern Illinois head coach and current James Madison head coach