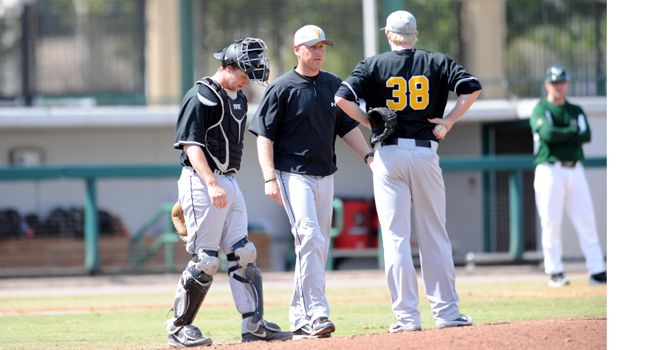 Over the past few years, the coaching staff has cultivated strong relationships with local high school and junior college coaches in the state of California. Valpo continued its trend of tapping into the Golden State pipeline with the signing of Delaney and Garbella.

“First and foremost, I want to thank (assistant coaches) Ben (Wolgamot) and Mike (Stalowy) for their work in identifying these men and making them a part of the program. We had some needs within our team and we feel these four are great additions," Schmack said.

Delaney graduated from Thousand Oaks HS in Southern California before spending a year at Orange Coast College and Fresno State. Delaney is a 5'10'', 190-pound righty who possesses the ability to play both catcher and first base.

“Daniel is just the type of man we want in this program. He is an exceptional worker and will do whatever it takes to get better. Daniel also has tremendous character and will be a great teammate. We look forward to his leadership on and off the field and welcome him to the family,” Schmack said.

Garbella owns perhaps the most impressive resume of any Valpo signee. The 6'1'' outfielder from La Jolla, California plays all three positions on the grass for Cathedral Catholic, the #1 ranked high school in the nation in 2013. In addition to leading last year's club in batting average, on-base percentage, home runs, and slugging percentage as a junior, Garbella is a member of the Italian National Baseball team. Furthermore, he led his team to a 1st place finish at the U18 European Championship, where he was named Tournament MVP.

“Gio is a very good athlete who can play all outfield positions. He plays for one of the top high school programs in the country, so he is no stranger to success. Offensively he can do many different things, having the ability to run and drive the baseball to all fields. Gio’s best days are ahead of him,” Schmack said.

Schmack added some middle-infield depth with the signing of Nolan Lodden. Lodden played a season at Heartland Community College and a year at George Washington University. The 5'10'' Des Moines, Iowa native accumulated a .368 on-base percentage in 39 games for the Colonials in 2013.

“The first time I met Nolan, I knew he would be a great fit for our program. Nolan is a person who knows what he wants and what it takes to get there. Nolan will have a great chance to step in a play right away, adding speed and a left handed bat to the lineup. He has experience at the Division I level which will help us achieve our goals on a national level,” Schmack stated.

Last, but certainly not least, was the addition of Luke Van Lanen. Both Prep Baseball Report and Perfect Game ranked Van Lanen as a Top 5 prospect out of the state of Wisconsin. The 6'2'' right-handed pitcher is a two-sport athlete at Pulaski High School in Pulaski, Wisconsin. Van Lanen's adept arm speed makes him a high-ceiling prospect.

“I am very excited about Luke’s future at Valparaiso. He is a top level athlete and the sky is the limit for him. Luke is a great athlete with a quick right arm and we feel once he commits his time fully to baseball, he will begin to take off. Luke is a family oriented kid and will fit in right away,” Schmack said.

Schmack emphasized both the on-field talent of these four as well as and the intangibles they possess.

"Not only are Daniel, Giovanni, Nolan and Luke great athletes, they are great people too. They are competitors and that is what will ultimately make us better,” Schmack concluded.