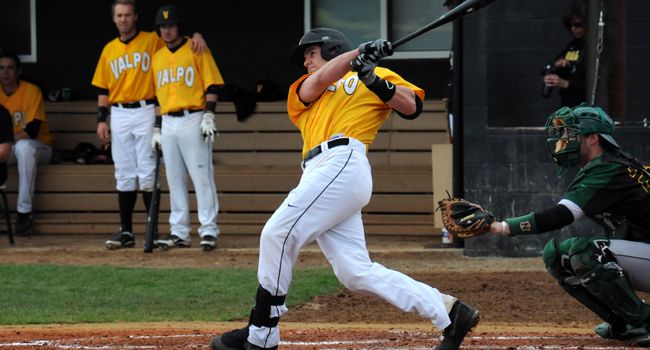 It wasn't until Game No. 35 last year that the Crusaders managed to put up double-digit runs in a game. This year's version wasted little time as the offense flexed its muscles en route to an 11-8 win over Samford in Homewood, Alabama on Saturday. Four players finished with multiple runs batted in while Bryce Yoder (Spencerville, Ind./Eastside) worked out of a tense situation for his first college win. Karch Kowalczyk (Peru, Ill./La Salle-Peru) earned the save for the second straight day thanks to a scoreless bottom of the 9th.

Valpo again gave its starting pitcher some breathing room with a crooked number in the top of the 1st. Spencer Mahoney (La Grange Park, Ill./Lyons Township) got the ball rolling with another game-opening walk. Chris Manning (Lake Forest, Calif./El Toro) beat out an infield single that moved Mahoney into scoring position.

Andrew Bynum (Huntington Beach, Calif./Ocean View [Orange Coast CC]) ripped a single to left that scored Mahoney. Manning and Bynum both advanced into scoring position following a Michael Morman (Rockford, Ill./Boylan Catholic) infield ground out. With one away, Kowalczyk laced a double to center that allowed the two seniors to coast home, giving Valpo a 3-0 lead.

Samford got into the run column in the second frame when a Caleb Bryson two-out double plated Drew McWhorter. McWhorter, the leadoff man in the inning, reached when he was hit by a Drew Hasler (South Bend, Ind./Mishawaka Marian) delivery.

The Bulldog offense continued its prowess in their half of the third inning. A leadoff two-bagger off the bat of outfielder T.J. Dixon opened the frame before three more Samford hits brought in three runs.

Trailing 4-3 after three innings, Valpo was forced to play from behind for the first time. The deficit didn't last long, however.

Mark Johnson (Evanston, Ill./Evanston Township) led off the top half of the 5th with a walk before a wild pitch and passed ball advanced the Crusader center fielder to third base with nobody out.

Manning moved to 2-for-2 on the day with a game-tying RBI single to left center. The single signaled an end to Samford starter Alex Ledford's afternoon. Manning promptly stole second off Bulldog reliever Jared Brasher to scoot into scoring position. Bynum corked a double to center that brought in the Valpo right fielder.

Kowalczyk was issued a free pass after Bynum moved up 90 feet following a wild pitch. Senior Andy Burns (Edwardsville, Ill./Edwardsville [Heartland CC]) put Valpo ahead 6-4 when he went opposite field with a single to plate Bynum.

Ellis Foreman (Round Rock, Texas/Stony Point) came on in relief in the 5th after Hasler issued a walk to the leadoff man. Foreman walked the first man he faced before coaxing a double play off the bat of Heath Quinn. McWhorter came through for Samford with a two-out basehit to left. The RBI cut Valpo's lead in half.

The Crusaders got the run right back in their next at bat thanks to a Spencer Mahoney RBI double. Freshman Nate Palace (Westlake Village, Calif./Oaks Christian) touched home after he led off the frame with a single up the middle.

Valpo relinquished its second lead of the ballgame in a rocky bottom of the 7th. With two men on base, Quinn shot a double to right center field that tied the game at 7-7. Infield throwing errors exacerbated Valpo's problems as Samford took an 8-7 lead on a Palace miscue.

Schmack summoned Bryce Yoder with runners on second and third with one out. Yoder got Brandon Haarer to ground out back to him before Bryson whiffed for the third out.

The Samford bullpen gifted a pair of runs Valpo's way in the top of the 8th. Charles Terry issued back-to-back walks to Palace and Johnson to open the frame. Andres Gracia was called in to relieve Terry who yielded a bunt single to Mahoney to load the bases.

Bynum and Morman both wore pitches in the back to force in a pair of runs and give Valpo a 9-8 advantage.

Yoder worked a 1-2-3 8th inning before the Crusaders added a pair of insurance runs in the ninth. Mahoney doubled in Jeff Edwards (Massillon, Ohio/Jackson) and Manning tallied his third hit and second RBI of the day with a single down the right field line.

Armed with an 11-8 lead, Kowalczyk entered the game in search of another save. The closer allowed the first two batters to reach via singles before getting McWhorter down on strikes for the first out. Tyler Filliben rolled over on a Kowalczyk delivery to ground into a game-ending 4-6-3 twin killing.

With the win, the Crusaders open a season 2-0 for the first time since 2009 when the Brown and Gold swept Morehead State in a two-game set.

"This was a total team win. We could've folded after giving up three in the 7th, but we didn't. We competed all nine innings," head coach Brian Schmack said.

Links to the live stats will be available at valpoathletics.com.