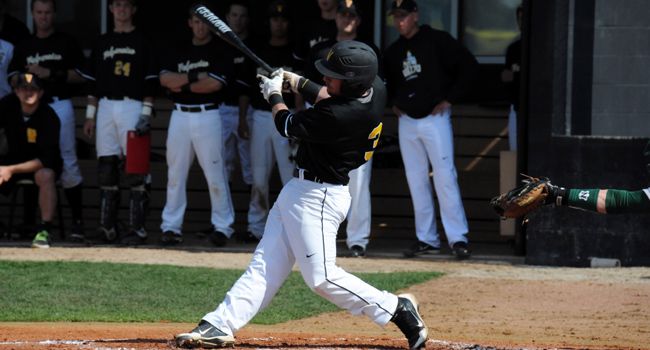 Taylor Shields allowed the three hits, walked one, and struck out two Crusaders over six efficient innings. Casey Antley fired three scoreless frames to earn the save for the Gamecocks.

Cole Webb (Tulsa, Okla./Union [Coffeyville CC]) settled in after a shaky beginning to his second start of the season.

Eddie Mora-Loera doubled after Michael Bishop was walked to open the bottom of the first. With both runners in scoring position, Griff Gordon drove in Bishop with a sac fly to center for an early 1-0 JSU lead. Two batters later, Paschal Petrongolo knocked in Mora-Loera with a single on an 0-2 pitch.

Valpo's best scoring opportunity presented itself in the second inning when Ray Bartolomucci (Concord, Calif./De La Salle) followed Burns' leadoff hit with a single of his own. But with two men on and nobody out, the next three batters recorded fly outs.

The teams traded zeroes until the Gamecocks opened the floodgates with a four-run sixth inning.

The first two Gamecocks reached base before Ryan Sebra sacrificed both into scoring position with one away. A Spencer Mahoney (La Grange Park, Ill./Lyons Township) error brought Cal Lambert in from third base. Webb summoned a ground ball off the bat of Tyler Gamble, but Gamble beat the back end of the double-play attempt. Petrongolo scored on the fielder's choice to make it a 4-0 game.

The Jacksonville State offense wasn't done, though, as Michael Bishop ended Webb's afternoon with a two-run single to right field to extend Valpo's deficit to 6-0.

Shields retired the final eight Crusaders he faced before giving way to Antley. The lefty reliever hurled three hitless innings, his only blemish was plunking Grant Yoder (Fort Wayne, Ind./Snider) to lead off the top of the 9th.

Jacksonville State tacked on two runs in the 7th and 8th innings as it cruised to a 10-0 final.

The Crusaders committed an uncharacteristic four errors in the field which led to five unearned Gamecock runs.

Offensively, Mahoney extended his on-base streak to 12 games when he walked to lead off the game for the third time already this season.

Webb (1-1) allowed three earned runs in 5 2/3 innings on the hill. He yielded six hits and walked four batters, tying a career high. Of his 87 pitches, 54 were for strikes.