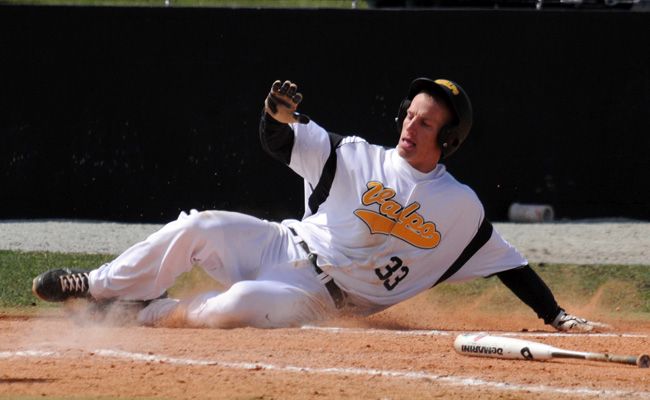 The Crusaders continued their good habit of scoring first-inning runs, but Jacksonville State broke a 3-3 tie in the 7th with three runs in a 6-3 win over the Brown and Gold at Rudy Abbott Field in Jacksonville, Alabama on Sunday.

Valpo strung together three hits in a row after JSU starter Adam Polk retired Spencer Mahoney (La Grange Park, Ill./Lyons Township) to kick off the game. Jeff Edwards (Massillon, Ohio/Jackson) singled to left field and scored on the next play when Chris Manning (Lake Forest, Calif./El Toro) stroked a double to the left-center gap. The RBI was Manning's fifth of the year. Left fielder Michael Morman (Rockford, Ill./Boylan Catholic) followed with a base hit to left that brought in Manning for a 2-0 Valpo lead.

Jacksonville State got both runs right back in the half of the first. The Gamecocks manufactured their first run after Michael Bishop drove a Mario Losi (Anaheim, Calif./Canyon) delivery to left for a hit. Bishop subsequently swiped second base to advance into scoring position. Eddie Mora-Loera moved Bishop up 90 feet with a ground out to the right side of the infield. With one away, Griff Gordon lifted a sacrifice fly to left to cut Valpo's lead in half.

The Gamecocks weren't finished in the inning. On a 2-2 pitch, Cal Lambert sent a double down the right field line. Ryan Sebra followed with a single to center field that plated Lambert.

Losi settled in after the first frame as the freshman retired ten of the next eleven batters he faced.

Valpo took its second lead of the afternoon in the fourth inning when Bryce Hara (Irvine, Calif./Northwood [Irvine Valley College]) got things cooking with a leadoff double, his first extra-base hit of the season. Freshman Nate Palace (Westlake Village, Calif./Oaks Christian), the next batter, ripped a hot shot at the JSU first baseman who was unable to field it cleanly, putting runners on the corner with no outs.

Catcher Jake Hanson (Yorkville, Ill./Aurora Christian) pushed an aggressive safety squeeze towards second base that scored Hara and advanced Palace to second base. The run made it a 3-2 ballgame.

A leadoff walk came back to bite Losi in the bottom of the fifth when Jacksonville State evened up the tilt. Chase Silvani was issued the free pass before stealing both second and third base with no one out. Losi was on the verge of escaping unscathed after he struck out Peyton Williams and coaxed an infield pop out off the bat of Bishop for the second out. But Mora-Loera delivered for JSU with a two-out RBI single to right center, tying the game at 3-3.

The Gamecock bullpen kept the Crusader offense at bay as Michael Mason struck out the side in the top half of the 7th.

Hanson erased a leadoff single when he gunned out pinch-runner Gavin Golsan. Golsan entered the game after Josh Bobo drove a Losi pitch back up the box. Silvani hit a double off the left field fence before pinch-hitter Paschal Petrongolo broke the tie with a triple over Manning's head in right.

Mora-Loera provided Jacksonville State with two insurance tallies later in the frame with a two-run double to left center.

Valpo brought the tying run to the plate with two outs in the top of the 8th, but Gamecock closer Travis Stout got Hanson to fly out to center, silencing the Crusader threat.

Stout earned his third save of the year with a scoreless ninth.

Valpo stranded ten runners in addition to striking out ten times in the 6-3 defeat.

The Crusaders (3-3) will take off for their spring trip Friday when they meet McNeese State (5-2) in Lake Charles, Louisiana for a three-game set. The Cowboys most recently split a pair of games with UT-Arlington, including a 9-8 19-inning loss on Friday.