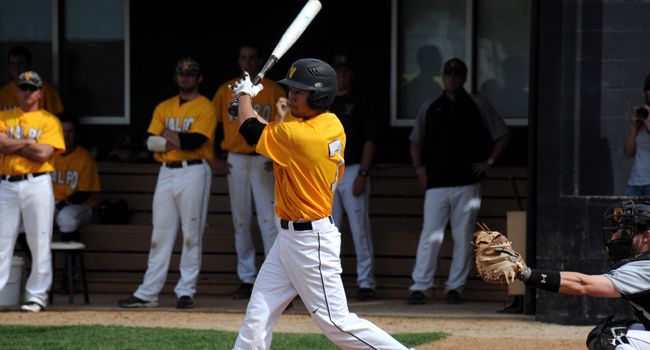 This Week in Crusader Baseball: The Crusaders’ spring break trip will have them away from Northwest Indiana for the next two weeks. Their first stop will take them to Lake Charles, Louisiana for a three-game set with the McNeese State Cowboys. The Cowboys are 5-2 on the young season, with one of those two losses coming in 19 innings to the UT-Arlington Mavericks. At the conclusion of Sunday’s game, Valpo will head west to Texas for six more games on the trip.

Last Time Out: After the two teams split a pair of lopsided slugfests to open the series, Valpo and Jacksonville State settled in for a close tilt in the rubber game on Sunday in Alabama. The contest was tied 3-3 at the stretch, but the Gamecocks pushed three runs across in their half of the seventh. Sophomore Drew Hasler limited JSU to one run on seven hits in seven stout innings on the hill Saturday. Karch Kowalczyk had a career day at the plate going 3-for-5 with five runs batted in, three of which came on a bases-clearing double.

On the Air: Links to the McNeese State audio feed and live stats will be available at valpoathletics.com.

Probable Starters: Senior RHP Cole Webb (1-1, 3.86) will take the ball in the first of the three-game series for the Crusaders. Sophomore RHP Drew Hasler (1-0, 4.91) takes the hill for Valpo in the Saturday game aiming to build upon a strong outing versus Jacksonville State last weekend. Freshman right-hander Mario Losi (0-1, 4.05) will make a pitch for his first win of the 2014 campaign in Sunday’s tilt against the Cowboys.

Series Notes: McNeese State swept a season-opening three-game series over the Crusaders in February 2010, the first and only time the two teams have met on the diamond. Karch Kowalczyk made his Crusader debut (and recorded his first collegiate hit) during the weekend set in Louisiana.

Scouting the Opposition: McNeese State currently stands at 5-2 overall after opening the season on a three-game winning streak. A 3-2 defeat of the Missouri Tigers is an early feather in their cap. Instead of swinging for the fences, the Cowboys rely on their ability to get on (.396 team OBP, 46 walks), get over (22 SBs), and get in (50 runs). Seven McNeese State players carry batting averages of .300 or higher including Jackson Gooch who is 12 for his first 30 at the plate.

Andrew Guillote is thriving as the table-setter of the Cowboy offense. The junior is batting .355 (11-for-31) out of the leadoff spot with six walks, and eleven runs scored. The infielder/outfielder is also a perfect 7-for-7 on the basepaths.

Gooch, the three-hole hitter, leads McNeese State with eight runs batted in. The center fielder also has a team-high 12 hits. Gooch finished 2013 as the only Cowboy with a batting average over .300 (.301) and 21 of his 65 hits were for extra bases. His 40 runs and three sac flies were also team watermarks a season ago.

Bryce Kingsley, Michael Clemens, and Michael DeSabrais are slated to make the starts for McNeese State on Friday, Saturday, and Sunday, respectively.

Kingsley, the opening day starter, lasted three innings versus Chicago State, yielding two runs - one earned - on four hits. Against UT-Arlington, the right-hander struck out four and walked just one in five innings, but surrendered four runs on seven hits over five frames. He didn’t factor in either decision.

Clemens was rewarded with a win against Missouri on Feb. 15th, after he punched out seven Tigers in 6 1/3 innings of two-run ball. He supplied the Cowboys with seven innings against UT-Arlington. The Mavericks touched up the righty for 13 hits and five runs, but McNeese eventually won 6-5.

DeSabrais’ only start came in the Cowboys’ 7-1 win over Southern Miss on Feb. 16th. The senior was one out away from being eligible for the win, but was lifted before finishing five frames. He held the Golden Eagles to one run, striking out three and walking just one in 4 2/3 innings.

Career Milestones Reached: Spencer Mahoney recorded his 100th hit for his Valpo career in last Saturday’s 3-for-5 game at Jacksonville State. In that same game, senior Chris Manning collected his 100th career run batted in for the Crusaders. He is currently two stolen bases away from 50.

Et Cetera: The Cowboy defense has committed only five errors through seven games...Friday’s tilt will be the first night game for the Crusaders...the Crusaders have scored first in all but one game so far...Valpo enters this series as the only Horizon League team not under .500.