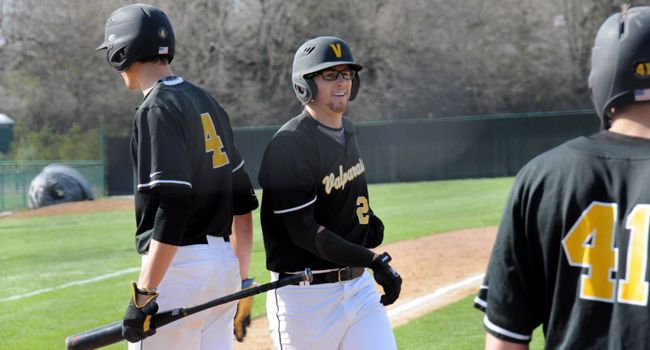 Manning plated the first Crusader run when the right fielder sent a shot to the right side of the infield that gave McNeese State second baseman Andrew Guillotte fits. The mishap allowed Spencer Mahoney (LaGrange Park, Ill./Lyons Township) to give the visitors a 1-0 lead. Karch Kowalczyk (Peru, Ill./La Salle-Peru) punished a Bryce Kingsley delivery to center for an RBI double. Kowalczyk's ninth run batted in put Valpo ahead 2-0 before Webb even took the bump.

Mark Johnson (Evanston, Ill./Evanston Township) worked a one-out walk before Mahoney sent a single to right field. Manning stepped to the plate and deposited his first home run of the season over the left field wall for a 5-0 advantage.

Webb met little resistance the first time through the order. The senior allowed a pair of Cowboy hits in the second, but quickly nixed them with an inning-ending double play.

McNeese State scored its first run in the home half of the fourth inning when Connor Lloyd singled home James Cantu. Cantu led off the frame with a walk before advancing to second on a balk.

The Cowboys went back to work in the seventh inning. Lloyd doubled down the left field line to get things going for McNeese State. Reed Gordy moved Lloyd to third base with a ground out to the right side of the infield. Right fielder Matt Williams drove in Lloyd with a one-out single up the middle. Four batters later, Williams touched home when Guillotte sliced a double down the right field line. The extra-base hit cut Valpo's lead to 5-3.

The Crusaders got a run back in their half of the eighth thanks to a Nate Palace (Westlake Village, Calif./Oaks Christian) that plated Andy Burns (Edwardsville, Ill./Edwardsville [Heartland CC]). Burns had led off the inning with a double to center.

The three-run lead didn't last long as Williams did more damage in the bottom of the eighth. With one out and the bases loaded, Williams sent a single to right field that scored Chayse Marion making it a 6-4 game. Lloyd was held at third on the knock.

Head coach Brian Schmack called on Kowalczyk in the toxic situation. Kowalczyk rewarded him by inducing an inning-ending 6-4-3 double play.

Things got dicey in the bottom of the ninth when the Cowboys put two on with one away. Jackson Gooch delivered with an RBI single to left center that scored Guillotte to trim the lead to 6-5. Marion grounded out to first for the second out but moved Gooch and Cantu to second and third, respectively.

The Crusaders weren't going to let Lloyd beat them so the McNeese State shortstop was given an intentional pass. With the bases loaded and two out, Gordy sent a drive into center that Bryce Hara (Irvine, Calif./Northwood [Irvine Valley College]) caught while on his stomach. The center fielder had slipped on the play but maintained the frame of mind to haul in the 27th out.

Valpo (4-3) took the first game of the series for the second time this season. Drew Hasler (South Bend, Ind./Mishawaka Marian) looks to remain undefeated on the season as he'll take the mound Saturday for the series win at 3:00 pm.