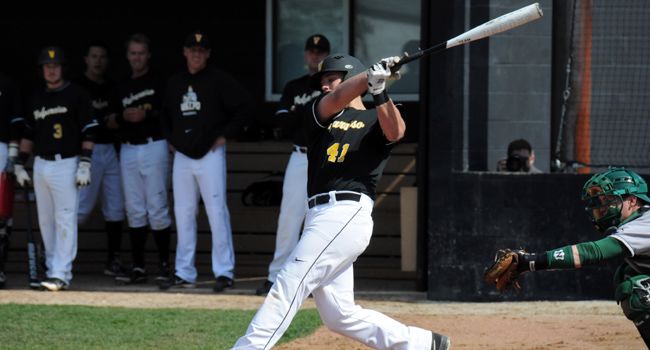 The Crusaders were unable to solve Michael Clemens Saturday as the McNeese State right-hander tossed a five-hit shutout in an 8-0 win over Valpo in Lake Charles, Louisiana.

The Cowboys took an early 1-0 lead when Chayse Marion doubled home Jackson Gooch in the bottom of the first. Saturday represented the third time a Valpo starting pitcher allowed at least one first-inning run.

Crusader starter Drew Hasler (South Bend, Ind./Mishawaka Marian) allowed a leadoff single to right fielder Matt Williams in the third. With one out, Williams moved into scoring position via a wild pitch. After Hasler got Marion to ground out for the second out, he unleashed another wild pitch. Williams was able to score on the play for a 2-0 score.

McNeese State put up a crooked number in its half of the fifth. Connor Lloyd recorded an RBI single up the middle that plated Williams. Lloyd's run-scoring hit was the third of the inning and brought Hasler's day to an end.

Ellis Foreman (Round Rock, Texas/Stony Point) walked the first man he faced before James Cantu brought Marion home with a sacrifice fly to right field. With Clemens in control on the hill, the 4-0 deficit seemed significant.

The Cowboys doubled their lead in a bottom of the sixth inning that saw six singles. Trevor Haas (Mount Prospect, Ill./Hersey) came on in relief after Foreman surrendered his fifth hit of the frame. McNeese State made it 8-0 when Andy Burns (Edwardsville, Ill./Edwardsville [Heartland CC]) couldn't handle a ball off the bat of Cantu.

Haas worked 1 2/3 innings without allowing a hit or a walk. The sophomore struck out a pair of Cowboys. Jason Condit (Putnam, Ill./Henry-Senachwine [Illinois Central College]) summoned three ground ball outs in a 1-2-3 bottom of the 8th.

The Crusaders (4-4) look to shake off the 8-0 loss Sunday afternoon in a 1:00 pm CT first pitch. Freshman Mario Losi (Anaheim, Calif./Canyon) shoots for his first career win as McNeese State will counter with right-hander Michael DeSabrais (0-0, 1.93). Links to the audio and live stats are up at valpoathletics.com.