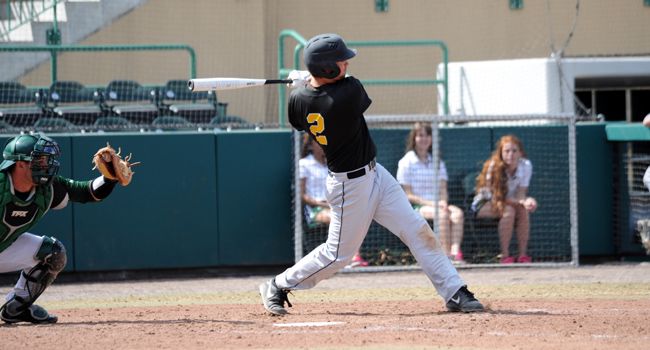 Strong winds from the South helped foster a good old-fashioned slugfest Sunday afternoon at Cowboy Diamond in Lake Charles, Louisiana. Chris Manning (Lake Forest, Calif./El Toro) did his part, blasting two homers over the left field wall, but seven Crusader runs in the first two innings didn't hold up as McNeese State scored 12 of the game's final 13 runs in a 15-8 win over the Brown and Gold.

For the sixth time in nine games, Valpo put up at least a run in its first at-bat. Jeff Edwards (Massillon, Ohio/Jackson) singled in Spencer Mahoney (LaGrange Park, Ill./Lyons Township) who had reached with a double. Edwards was caught stealing before Manning blasted a solo shot to left for a 2-0 lead.

Jackson Gooch exploded on a delivery from Mario Losi (Anaheim, Calif./Canyon) in the bottom of the first before Billy Sommers singled home a pair of Cowboys for a 3-2 McNeese lead.

The Crusaders capitalized on a Cowboy miscue for five runs in their half of the second.

McNeese State skipper Justin Hill called on Kaleb Jon Fontenot in relief of Clemens. Manning welcomed Fontenot with a three-run blast to left that put Valpo back on top 7-3 after an inning and a half.

The first four Cowboys reached in their half of the second. A Grant Yoder (Fort Wayne, Ind./Snider) error at first base allowed Gooch to score after the center fielder had smacked a two-run double. Sommers drove in Chayse Marion with a sac fly to right to tie the game at 7-7.

Cameron Toole lifted a solo shot to left in the bottom of the third to give the home team an 8-7 advantage. The Cowboys added two runs later in the inning helped by a pair of walks.

Valpo got its eighth and final run in its fourth after Hanson scored on an Edwards' fielder's choice. McNeese State silenced any chance of a comeback with three runs in its half of the fourth for a 13-8 lead.

The Crusaders loaded the bases with one away in the ninth but Phillip Lebleu got Andy Burns (Edwardsville, Ill./Edwardsville [Heartland CC]) to ground into a game-ending 6-4-3 double play.

Scott Jerge (Munster, Ind./Munster) was saddled with the loss. Valpo's 9-3 hitters were a combined 9-16 with seven runs and eight RBIs.

Valpo (4-5) dips under the .500 mark for the first time this season. The Crusaders head West to Texas to spend the rest of their Spring Break in the Lone Star State. A single tilt against #15 Texas awaits the Brown and Gold before a three-game set with Texas A&M Corpus-Christi gives the Crusaders a test next weekend,