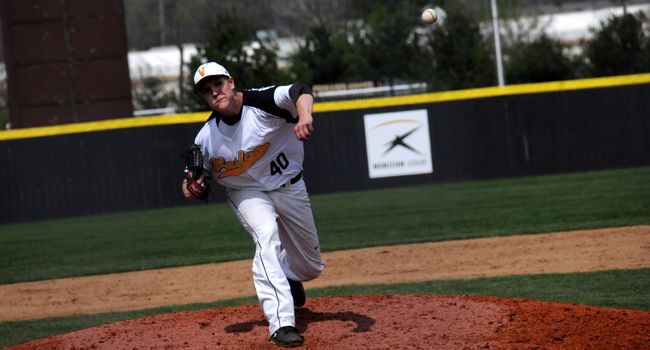 The 10th-ranked Texas Longhorns proved why they're one of the best pitching teams in the country Tuesday as seven different hurlers combined to beat Valpo 7-1 at Disch-Falk Field in Austin.

Sophomore Dalton Lundeen (Streamwood, Ill./Streamwood) was assigned the task of handling the Texas lineup in his first start of the 2014 season. Lundeen has been recovering from a case of mononucleosis that he was diagnosed with in early February. The left-hander lasted four innings, surrendered five hits, four runs (two earned), while walking two and striking out three. On a pitch count, Lundeen threw 81 pitches.

Michael Morman (Rockford, Ill./Boylan Catholic) had a 2-for-4 night. The left fielder was the only Crusader with a multi-hit game.

Texas jumped on Lundeen and the Crusaders early. Mark Payton scored on a squeeze play in the first inning. Lundeen was unable to get an out on the play as he was credited with an error. Two batters later, Ben Johnson made it 3-0 in favor of the Longhorns with a two-run single to left field.

The Brown and Gold had a chance to counter in the third inning. Catcher Ray Bartolomucci (Concord, Calif./De La Salle) broke up a string of eight straight Crusaders retired by starter Blake Goins with a single to left. Spencer Mahoney (La Grange Park, Ill./Lyons Township) worked an eight-pitch walk before Jeff Edwards (Massillon, Ohio/Jackson) drew a free pass himself to load the bases with two outs.

Goins got a 2-0 fastball in on the hands of Chris Manning (Lake Forest, Calif./El Toro) to jam the Crusader right fielder into a 5-3 inning-ending ground out.

Longhorn reliever Josh Sawyer came on in relief of Goins after three scoreless innings. Sawyer issued a leadoff walk to Karch Kowalczyk (Peru, Ill./La Salle-Peru) before allowing the Crusader DH to advance to third on a pair of wild pitches. Freshman Nate Palace (Westlake Village, Calif./Oaks Christian) drove in the lone Valpo run with a ground out to third base. Palace's fourth RBI of the season made it a 3-1 game after three and a half innings.

Texas got the run right back in its half of the 4th. Collin Shaw scored Johnson on a hard-hit grounder to second base. Johnson had led off the inning with an infield single.

The Longhorns added three runs in the bottom of the 5th while Augie Garrido paraded reliever after reliever out of the bullpen to keep the Valpo offense at bay. In total, Texas used seven pitchers in front of an estimated 4,551 fans.

Ben Mahar (Mundelein, Ill./Mundelein), Bryce Yoder (Spencerville, Ind./Eastside) and Jason Condit (Putnam, Ill./Henry-Senachwine [Illinois Central College]) each threw up zeroes out of the pen for Valpo. Sophomore Trevor Haas (Mt. Prospect, Ill./Hersey) was on the hill for the three-run 5th inning, but only one of those runs was earned.

Valpo (4-6) will head to San Marcos to face Texas State Wednesday night at 6:30 pm. RHP Ellis Foreman (Round Rock, Texas/Stony Point) will make his first start as a Crusader opposite fellow right-hander Dylan Bein. Links to the audio, video, and live stats are available at valpoathletics.com.