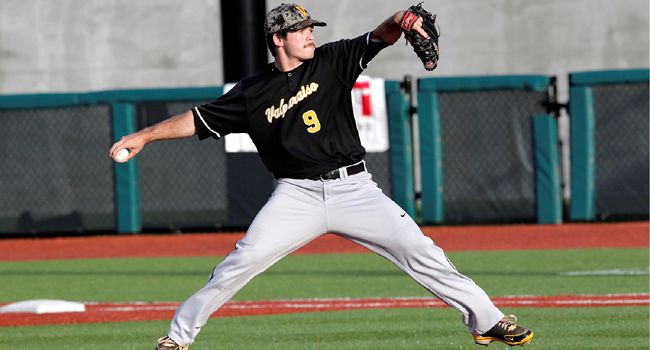 The Crusaders won their Horizon League opener for the first time since 2010 Friday night with a 4-3 win over UIC at Granderson Stadium in Chicago. Cole Webb (Tulsa, Okla./Union [Coffeyville CC]) turned in eight strong innings before handing the ball over to Karch Kowalczyk (Peru, Ill./La Salle-Peru) for his fifth save of the season. Spencer Mahoney (La Grange Park, Ill./Lyons Township) scored three of the four Valpo runs in addition to recording a 2-for-4 night at the plate.

"Our guys competed and took advantage of some mistakes. I thought we took a lot of tough at-bats at the plate and our pitching battled all night," head coach Brian Schmack said.

The Brown and Gold got on the scoreboard first for the 11th time in 16 games.

The Flames were one strike away from sitting the Crusaders down in order in the 2nd before UIC starter Tomas Michelson hit Andy Burns (Edwardsville, Ill./Edwardsville [Heartland CC]) with an off-speed delivery. The inning was kept alive when Nate Palace (Westlake Village, Calif./Oaks Christian) reached on a throwing error by Flame second baseman John Coen. Jake Hanson (Yorkville, Ill./Aurora Christian) made UIC pay with a single through the left side that plated Burns. Hanson's seventh RBI of the season put Valpo ahead 1-0.

Both teams traded a run in the third.

After leading off the inning with a single, Mahoney scored on a throwing error by UIC catcher Alex Jurich. Mahoney was standing on third base when Chris Manning (Lake Forest, Calif./El Toro) attempted to steal his fifth bag of the year. Manning successfully swiped the base as Jurich's throw sailed into center field allowing Mahoney to jet home.

The Flames cut Valpo's lead in half in the bottom half of the frame. Jake Nath got things started with a leadoff triple to the right center gap. He later scored on a fielder's choice off the bat of Coen.

The Brown and Gold re-established a two run lead in the top of the fifth. For the second time in a row, Mahoney and Jeff Edwards (Massillon, Ohio/Jackson) reached base to start the inning. Behind 0-2 in the count, Manning took a fastball off the arm to load the bases with no outs. Kowalczyk, the designated hitter, laced a liner towards the left side of the infield. Cody Bohanek took two steps to his right for the catch before turning around and firing to second to pick off Edwards. Michael Morman (Rockford, Ill./Boylan Catholic) didn't let the opportunity go to waste, though, as the outfielder delivered a two-out single up the middle that brought in Mahoney.

Just as they did in the third, the Flames wasted no time getting the run back in their half of the frame. The first two batters reached before Alex Lee sent a fly ball towards the right center field gap. Manning raced over towards the warning track and made a running catch. Jurich scored from third on the sac fly but Jeff Boehm had to retreat to second on the play. The Crusaders got out of the inning with a 3-2 lead intact.

Things stayed that way until the bottom of the seventh. Webb had retired eight in a row before Boehm sent a line drive over the left center field wall for a solo home run, his first as a Flame. The homer knotted the game at 3-3.

Both starting pitchers went eight innings. Webb (3-2) allowed three runs on four hits while walking two and striking out three. 59 of his 94 pitches were for strikes. Michelson surrendered three runs on six hits. He struck out five, walked one, and hit three batters.

Extra innings loomed as UIC closer Mitchell Schulewitz retired the first two Crusaders he faced in the top of the 9th. Schulewitz got ahead 0-2 on Mahoney before the Crusader shortstop worked a walk. With two away and Mahoney on first, Edwards sent a liner into right center that Nath camped under. The ball went in and out of Nath's glove and bounced away as Mahoney raced around the bases to give Valpo a 4-3 advantage.

With two away in the 9th, a pair of Flames reached before Kowalczyk got Boehm to fly out to left for the final out of the game.