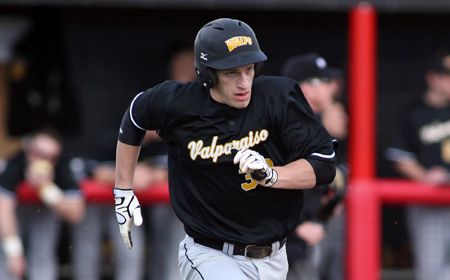 The Crusaders played another tight affair against their in-state rivals Wednesday as they fell 4-1 to Notre Dame at Four Winds Field in South Bend.

With father Craig on hand, the Biggio brothers gave Notre Dame an early 2-0 lead. Conor took an Ellis Foreman (Round Rock, Texas/Stony Point) delivery off the elbow before scoring on a Blaise Lezynski one-out single. Lezynski touched home later in the inning on a Cavan Biggio sacrifice fly to left field.

Valpo cut the deficit in half in the top of the second. Michael Morman (Rockford, Ill./Boylan Catholic) led off the frame with a knock up the middle. The newly-appointed third baseman swiped his eighth base of the season to move into scoring position before an out was on the board. An Andy Burns (Edwardsville, Ill./Edwardsville [Heartland CC]) ground out to the right side of the infield advanced Morman to third base. Morman was able to score standing up after Irish starter Nick McCarty unleashed a wild pitch with two outs.

The game took on a rapid pace in the middle innings as Foreman recorded four outs on five pitches at one point. The right-hander needed just 45 tosses to sail through the first five frames.

Foreman quickly retired the first two batters in the bottom of the sixth until the Irish strung together three hits to plate their third run.

Notre Dame's Mac Hudgins made it a three-run lead for the home team in the seventh when he laid down a squeeze that scored Jack Flaherty.

Donnie Hissa took over on the mound for the Irish after McCarty turned in six innings of one-run ball. The reliever threw a pair of scoreless frames.

Karch Kowalczyk (Peru, Ill./La Salle-Peru) registered his fourth consecutive scoreless appearance as he faced the minimum in the bottom of the eighth.

The Crusaders were unable extend the game in the ninth as Cristian Torres earned his second save of the season for Notre Dame.

Notre Dame is the next team on Valpo's schedule as the Crusaders (9-10) and Irish (9-14) are slated to meet again next Tuesday at Four Winds Field. Stay tuned to valpoathletics.com for any updates.