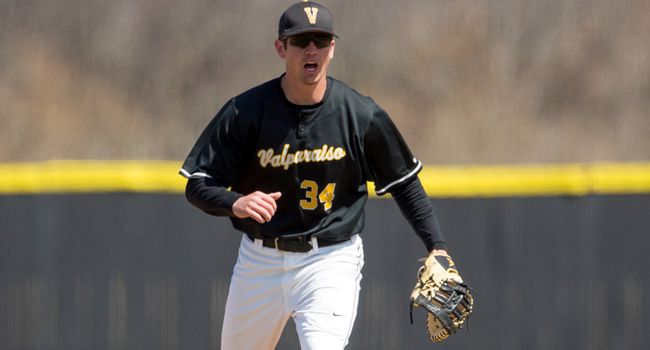 The Valparaiso baseball team handed Wright State its first two losses in Horizon League play of the season Saturday at Emory G. Bauer Field, sweeping both ends of the twinbill from the Raiders, 3-1 and 2-0.

Facing a Wright State team which entered the day at 8-0 in league play this year, Valpo struck quickly in the opener.  The Crusaders loaded the bases with one out on a single and a pair of walks, and Michael Morman (Rockford, Ill./Boylan Catholic) drew a full-count walk to bring home the first run of the game in the form of Spencer Mahoney (La Grange Park, Ill./Lyons Township).  Andy Burns (Edwardsville, Ill./Edwardsville [Heartland CC]) followed with a roller on the infield, enough to allow Chris Manning (Lake Forest, Calif./El Toro) to score from third and make it 2-0 Valpo.

Wright State’s Kieston Greene led off the second with a solo homer to cut the Crusader lead in half, but Valpo would get that run back in the bottom of the fourth, as Morman crossed the plate on a sacrifice fly by Andrew Bynum (Huntington Beach, Calif./Ocean View [Orange Coast CC]), making it 3-1.

Valpo put just two runners on base the remainder of the opener, but the three runs proved to be more than enough thanks to the work of the Crusader pitching staff.   Cole Webb (Tulsa, Okla./Union [Coffeyville CC]) scattered five hits in his seven innings of work, closing his stint by working out of a second and third, one-out jam in the seventh to improve to 4-2 on the season.  Ben Mahar (Mundelein, Ill./Mundelein) pitched a scoreless eighth to maintain the two-run edge, while Karch Kowalczyk (Peru, Ill./La Salle-Peru) tossed a 1-2-3 ninth inning for the save.  Joey Hoelzel went the distance for Wright State in the losing effort, falling to 4-3 on the year.

Only one half-inning in the nightcap would feature any runners crossing the plate, as the Crusaders plated the game’s only two runs in the bottom of the third.  Bynum led off the frame with a single, scoring three batters later on a base knock by Mahoney.  Mahoney then swiped second base to move into scoring position, a steal which proved vital as Wright State’s third baseman committed an error on the next batter which allowed Mahoney to score and make it 2-0 Crusaders.

Much like Webb’s effort in the opener, Crusader starter Dalton Lundeen (Streamwood, Ill./Streamwood) worked around trouble to scatter Wright State players on the basepaths.  Lundeen left eight Raiders on base in his seven innings of work as he improved to 2-2, most notably inducing a flyout to work out of a bases-loaded situation in the sixth inning.  In his second appearance of the day, Mahar pitched a perfect eighth, and Kowalczyk picked up a strikeout with the potential tying runs on base to earn his second save of the day and seventh of the year.  Robby Sexton threw the second complete game of the day for Wright State (14-14, 8-2 Horizon), falling to 4-4 on the year.

Valparaiso (11-13, 3-2 Horizon) looks for the series sweep of the Raiders Sunday afternoon at noon at Emory G. Bauer Field.  Live stats will be available at ValpoAthletics.com.